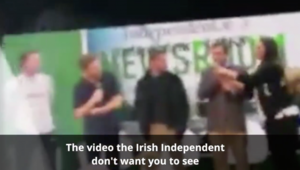 It’s not just wellies and muddy furrows you know.

37 thoughts on “Meanwhile, At The Ploughing Championships”