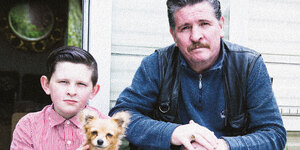 A new play by writer and actor Michael Collins.

To be performed at The New Theatre, Dublin from September 28 until October 2, as part of the Dublin Theatre Festival.

Written to commemorate the first anniversary of the Carrickmines tragedy, Ireland Shed a Tear? is a new play by acclaimed writer and actor, Michael Collins (Pavee Lackeen, Killinaskully, Glenroe, King of the Travellers).

Using song and poetry, it portrays the life experiences of one Traveller family, while engaging the wider community in a dynamic and lighthearted way.

In the aftermath of the fire that claimed the lives of ten members of the Connors and Gilbert families, including a pregnant mother, Tom sees the introduction of a national fire safety audit of Traveller accommodation as an opportunity for a better life for his family.

Living conditions, safety, and issues with his local council might finally be resolved. However, he soon discovers that the battle is far from over.

See here for tickets and times.

Previously: The Trouble With Travellers

9 thoughts on “A Year On From Carrickmines”