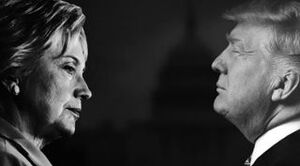 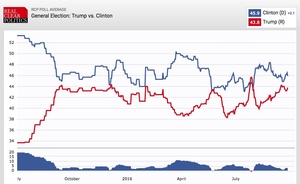 Ahead of tonight’s US Presidential Election debate, there’s a decided advantage for Democratic candidate and veteran debater Hillary Clinton in multiple polls ahead of Donald Trump.

On average according to poll aggregator RealClearPolitics, Clinton has a narrow 2.3% lead over Trump in the run-up to the debate.

Trump has resurged from a June slump in the polls to go neck-and-neck, ahead of tonight’s political Superbowl to be held in six fifteen-minute rounds.

Clinton has come under fire in recent weeks from political opponents over health issues and her fitness to contest the election. Meanwhile, the pressure is on Trump to dial back from his grand statements and playing to his well-established peanut gallery.

Fact-checking will come into play during the course of the discussion, but pressure is on both candidates to outline the upsides of their respective vision.

Meanwhile, over at the Guardian, Dan Roberts has compiled ten awkward questions that could put either candidate off their footing this evening.

Who Does The World Want For US President?