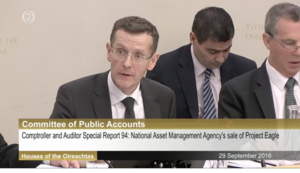 The Comptroller and Auditor General Seamus McCarthy fielded questions from the members of the Public Accounts Committee following his office’s report into Nama’s sale of Project Eagle.

That, it later turned out, was the major crux of NAMA’s defence when the report was finally published

@gavreilly he is incorrect on this point

The meeting has just been suspended until 2pm when chairman of Nama Frank Daly will appear.

Previously: A Probable Loss Of Value To The State Of Up To £190million’

‘You Give Limited Information To Get The Answer That You Want’

‘It’s As If There Was No C&AG Report’