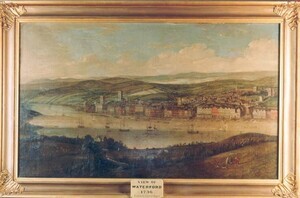 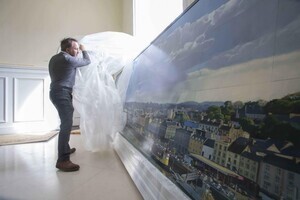 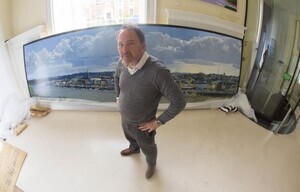 From top: Willem Van der Hagan’s view of Waterford, c1745, and Blaise Smith’s Waterford 2012 painting showing the city from across the River Suir.

The Office of Public Works and Waterford City & County Council recently commissioned Irish artist, Blaise Smith, to create a new large-scale painting that reflects a 21st century view of Waterford city under the Per Cent for Art Scheme for flood defence works.

In 1735, Waterford Corporation, as it was then known, commissioned a painting of the city from a Dutch painter William Van der Hagen (d. 1745). This painting still hangs today in the Bishop’s Palace and is considered to be a painting of national importance.

The new painting entitled “Waterford 2016”, 5 metres in length and comprised of 52 panels, will act as companion painting to the Van der Hagen painting.

10 thoughts on “A Bigger View”