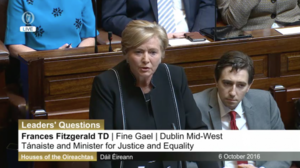 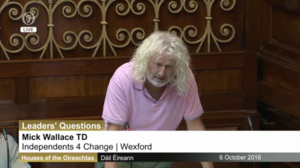 During Leaders’ Questions in the Dáil.

Readers may recall how, during the O’Higgins’ Commission of Investigation into Sgt Maurice McCabe’s allegations, Colm Smyth, SC, initially told Judge Kevin O’Higgins that, on behalf of Ms O’Sullivan, his instructions were to “challenge the integrity of Sgt McCabe and his motivation”.

This was based on a meeting in Mullingar between Sgt McCabe and two gardaí.

Several months later, on the day Commissioner O’Sullivan was due to give evidence – by which time Sgt McCabe had produced a transcript of his meeting in Mullingar with two gardaí – Mr Smyth told Judge O’Higgins: “The position now is that his motive is under attack, credibility is under attack from the Commissioner. But not his integrity.”

Mr Wallace’s raising of the O’Higgins Report followed reports this morning that Garda whistleblowers have said they will not co-operate with a State inquiry until Commission O’Sullivan temporarily steps aside.

From Leaders’ Questions in the Dáil…

Mick Wallace: “Minister, yes Nicky Keogh did write to you four times. You replied once when he told you about the harassment that he couldn’t have been suffering without the commissioner’s knowledge. And you wrote back to him to say they were looking for an urgent report from the Garda Commissioner – that was May of this year, right? May. You say you follow up things quickly. May is a long time. It’s over years Minister that myself and Deputy Daly had been telling you about the huge problems that are not being addressed – over two years.

“How in God’s name can you say that you’re dealing with these matters. You’re talking about a rush to judgement, two years? You’re saying that claims not properly tested. Minister you have the transcript from the O’Higgins’ report hearings, in your office. Is there not enough information in that, was that not properly tested? The role that she played in trying to undermine the credibility of Maurice McCabe, is there not enough in that for you? You talk about people disposing the laws of the land? God bless us, Minister. What arrived on your desk last Monday, oh god, look it, if half of it, if any of it is true, how bad is it? I’m not easily shocked. I’ve spent my life living in the real world. And I know how bad things can be out there. I haven’t seen the like of it. It’s horrific. It’s mind numbing.

“Myself and Clare Daly have met the two senior gardaí who have made the protected disclosures and we haven’t briefed the protected disclosures but Minister sitting down listening to it, face to face, oh my God. I’m not…I don’t want to talk about it anymore, right? Listen, Minister, you’re talking about another inquiry, another judge. You talk about the new broom you brought in. Nothing has changed, Minister. Nothing. And we marked our cards for you on your legislation on GSOC and on the Policing Authority. We’ve have [Judge] Mary Ellen Ring and Jospehine Feehily stressing the lack of authority that they have through legislation to do their jobs properly.

“The gardai, minister, are in turmoil. There’s a split in it. There’s two camps. She has promoted a ring around her. It’s corrosive. She is doing so much damage to An Garda Siochana, there are so many good gardai, minister, that are shocked at how she is operating. You cannot leave her in position and Minister, the idea that there will be an investigation while she was in place, is nuts.”

Frances Fitzgerald: “Well, deputy, you’ve made a number of comments there, I will repeat what I said, that I believe, you may not, but I believe that due process is important. I believe that the law, should be used carefully in these circumstances. I don’t believe in making a decision before the evidence has been heard. What we have is a body of allegations that we brought forward and I have said to the House, that I believe that they are serious and that they ought to be investigated. And I will ensure that that happens. And I will ensure that there is follow-up, depending on the outcome and the output from that investigation. Of course, I will. That would be my job and that’s what I would do.

“Quite a number of things have changed. For the first time, we have independent oversight. We have the Police Authority where the public with the public meetings can see An Garda Siochana be accountable to a new policing authority, being chaired by Jospehine Feehily and a very, very competent and serious board who are totally committed to their task. That’s different, that’s changed.

“GSOC have been given new powers and I’m perfectly prepared to meet both chairs to discuss further changes that are necessary to the legislation. You’ve made a number of points about investigations going on over a period of time. And yes, investigations do take time. There are procedures to be followed. And let me make the point, in relation to the disclosures that were made some time ago. And what’s been happening. And without commentating in any way on the disclosures, who has made disclosures, or the disclosures themselves, I can tell the House that I am extremely concerned about matters which have been raised in relation to policing in Athlone. And by the way, deputy, I wrote to you and I haven’t received a reply.”

“I have sought and received a number of requests form the Garda authorities about this matter. These indicate that a series of investigations have been taking place into the complex issues involved, including criminal investigations, disciplinary investigations and investigations by the Garda Siochana Ombudsman (GSOC). Not all of these are yet completed, I am monitoring the situation closely and I expect further reports from An Garda Siochana about these matters and I do want to make it very clear, as I’ve already said, that should the present investigations not succeed in fully addressing matters of public concerns which have arisen, and I’m talking about the investigations that are being under way, I’m not talking about the more recent protected disclosures which only arrived on Monday, which I am currently considering.

“I will have no hesitation, in establishing some other form of inquiry, but I will wait for due process to take its place and to continue. And I won’t act precipitously either in relation to that investigation, or indeed the recent protected disclosures, but I will follow the letter of the law and I will follow the legislation that was passed in this house where people have a right to confidentiality and people have a right to due process. And I wouldn’t be doing my job, as Minister for Justice, if I didn’t follow due process and the law which has been laid down which we have all agreed to be following in relation to protected disclosures. And we are the first Government, as has been said already and has been spoken about for many years, we’re the first Government to actually bring in law to deal with the issue of protected disclosures.”

Wallace: “Well it doesn’t seem to be working then. Minister, you’re talking about returning letters. I wrote to you a year ago and I gave you evidence of the massaging of crime figures in the same place, I asked you about the report yesterday. A year ago? My god, and why is the fella on the promotion list? Number 14? Why? You tell me. And there’s another guy that was reported by the whistleblower down there and he got promotion, but you know what? The people that stood by that man in that station, they didn’t get promotion.

“The commissioner said in a statement yesterday that she wishes to reiterate that any employees in An Garda Siochana will forward any concerns or issues they might have, will be taken seriously ad the matters examined. Well, my god. People can’t believe what this woman is saying. Minister, what she says in public and what she does privately is 100% different. You can say that you don’t have enough evidence, Minister, and you want due process, right?

“Was the O’Higgins report not enough for you in the first place? So let’s forget about what you got on your desk last week, was that not enough for you? The dogs on the street can see that there was a deliberate effort on her part to undermine the credibility of Maurice McCabe. How in god’s name can you leave her in position after that? I tell you what minister, as long as you leave her in position, there will be allegations coming in against that commissioner and, you know what, it’s only going to get worse, Ministier.”

Fitzgerald: “Yes, I did receive a letter from you. To which I replied. I have the letter here. And I went back to and I asked you to give me some detail that was important in relation to protected disclosures, if I was to follow up the points that you made. You didn’t respond to me.”

Wallace: [barely audible as microphone was off] “I didn’t get it.”

Fitzgerald: “Well, it was sent to you here, in Dail Eireann. Ok…I didn’t get a reply from you for the information that I asked from you. I’ll send it to you again….”

In The Irish Times, Fiach Kelly, a journalist,  writes :

Knee-jerk calls for resignations and blanket condemnations lead to a demeaning of the political system and erode trust in politics.

…Dáil privilege is nowadays often used to air serious allegations that have been investigated thoroughly elsewhere.

…The latest claims are contained in protected disclosures currently in Ms Fitzgerald’s possession, and have led to calls for the immediate resignation of Ms O’Sullivan.

It is undoubtedly the case that some whistleblowers, such as Sgt McCabe, were poorly treated but it is equally unacceptable for people to call for resignations, on foot of serious allegations that have not yet been tested.

...there have been substantial efforts to reform the justice system in order to increase public confidence in it and to help improve the culture of An Garda Síochána to make it a more open place for those with dissenting views and concerns about how the force is being run.

These reforms have yet to be completed and are still being bedded in.

18 thoughts on “‘Was The O’Higgins Report Not Enough For You?’”