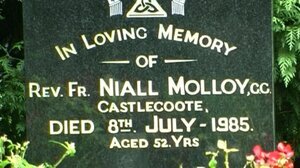 Below are three clips are from a forthcoming documentary by Gemma O’Doherty about the 1985 death of Fr Niall Molloy in Kilcoursey House in Clare, Co Offaly – the home of Richard and Therese Flynn – and the subsequent cover-up of same.

Fr Molloy died at the house on the day after the wedding of the Flynns’ daughter Maureen to Ralph Parkes.

The first clip is of Gerry North, a neighbour of the Flynns, describing how a witness in the case told him gardai wrote his witness statement.

The second is of another neighbour of the Flynns, Brian Sheridan, who speaks about the close relationship between Fianna Fáil minister Brian Lenihan Snr and the Flynns,

In the third clip, former Garda sergeant Kevin Forde of Clara, Co Offaly, who was the first officer on the scene at the murder of Fr Niall Molloy at a mansion in Clara in 1985, describes his concerns about how the murder case was handled. The case was soon taken over by his Dublin superiors.

“‘There were two guards there to interview me’. He said ‘I was absolutely scared’, he said, going in. ‘Never had been in for an interview before in my life’ which he hadn’t and he said ‘I was scared’. And he said ‘but when I got there, I realised the two guards were more nervous than I was, in case of what I’d say’. And he said, ‘basically what happened was they told me what to say, I repeated it and they wrote it down’.

“I can still see Brian Lenihan swinging in a hammock and a big smile on him and I remember him going in, we were at the bar, and he made some comment, he couldn’t get a pint, so he went in and pulled his own pint which showed how friendly he was with the Flynn’s. He just  wasn’t a wedding guest, he was part of the furniture. So, you know, he was always in and out of Flynn’s.”

“I had concerns about the investigation because when I learned that neighbours hadn’t been called to, no enquiries had been made, say house-to-house enquiries and so forth – that, that concerned me.”

The Fr Niall Molloy documentary will be broadcast on YouTube, where Ms O’Doherty’s previous documentary Mary Boyle: The Untold Story (2016) has garnered 200,000 views.

Previously: The Father Of All Cover-ups

Lifting A Silence In The Suburbs