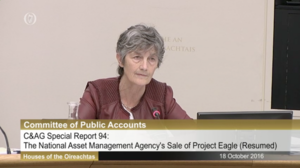 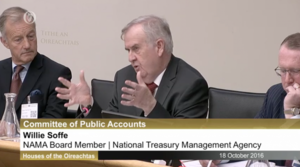 The Oireachtas Public Accounts Committee is continuing to question Nama officials in relation to the sale of Project Eagle.

The three members of Nama before the PAC today are non executive director at NAMA Oliver Ellingham, and Nama board members Willie Soffe and Brian McEnery.

Mr McEnery is chair of Nama’s audit committee and a former member of Nama’s Northern Ireland Advisory Committee (NIAC) – alongside Frank Cushnahan who was heard receiving £40,000, in bundles of two, from a Nama client during a secret recording broadcast on a BBC Northern Ireland Spotlight programme last month.

Readers may recall how, on Friday, a former member of Nama’s NIAC Brian Rowntree went before the Public Accounts Committee and spoke of the NIAC seeing a University of Ulster study which contained both commercially sensitive and confidential information in relation to Nama.

“This refers to a piece of work, an evidence based piece of work undertaken by a university who were doing land assembly analysis and before they’d even undertake or engage with NAMA they had whole stage of caveats around the confidentiality of the information and this was explained to the committee, now if that’s not commercially sensitive, I don’t know what is. This data not only had the location and types of property, this data also had details of planning permissions, current, and about to expire and potential for renewal. it also had details of housing and residential need overlaying on top of it,  it also had details in consolidated form of holdings by other banks. So one would have a got a picture of the complete land bank of Northern Ireland, and one one have looked at the opportunity locations within that portfolio.”

“…The information was provided to the university by NAMA, so it was shown as NAMA properties and there was a separate section of the report which was privileged to NAMA which showed the NAMA impact analysis across all those platforms..”

In addition, Ms Connolly questioned Nama’s decision not to tell Lazard – which was hired to oversee the sale of Project Eagle – about the ‘fixer fee’ arrangement whereby 15million pounds was to be divided between law firm Brown Rudnick, Belfast solicitors Tughans and Frank Cushnahan if Pimco successfully bought the Northern Ireland loan book.

After Pimco’s withdrawal from the sale – following the fixer fee arrangement becoming known – Cerberus bought the loan book as Brown Rudnick and Tughans continued to be involved in the sale.

Catherine Connolly: “In relation to the [University of] Ulster research. And Mr Rowntree was very clear about that: that it was a high-level piece of research and you’ve confirmed that to day and there were many presentations and he said that was potentially confidential information that somebody could make use of. To summarise him, that’s what he said. You probably listened carefully to his evidence so you know better than I did. So, are you disagreeing with him on that?”

Soffe: “Well, to explain, I mean the information in relation to planning zoning is available in planning offices all over…”

Connolly: “I understand that, I’ve been 17 years in local authority, I head you say that: I’m asking you a question…”

Connolly: “No my question is: are you disagreeing with Mr Rowntree? That’s simply my question.”

Soffe: “I don’t see …  there was nothing… anything particularly confidential about it that was of benefit. The same information could be found by anyone who wanted to inquire about developmental… was possible…”

Soffe: “Yeah, well we were..they were to come back with..”

Connolly: “You didn’t give them a written document. You gave them a verbal briefing. Okay. And then the Comptroller and Auditor General has raised concerns in relation to what you relied on – the assurance from Lazard and today, you’ve relied on that again and Mr Soffe, in particular, you’ve come back and you’ve said that Lazard reassured you that the process was….”

Connolly: “Okay. Now, you never told Lazard that Pimco had withdrawn in the circumstances that they had withdrawn.”

Soffe: “It was not relevant for them. They were gone out of the process and like, you know, there was no reason to discuss the, to discuss it with them. Pimco wanted to go away quietly and they were allowed to do that.”

Connolly: “Well, they certainly didn’t go away quietly because we’re talking about it now in 2016.”

Soffe: [Lazard] gave us an absolute assurance that there was potential, tension to the end, competitive tension right to the very end and that we were achieving more than our minimum price.”

Connolly: “You’re not listening to my question, sorry now. The Comptroller and Auditor General has raised an issue in relation to the nature of the assurance given by Lazard. And he says that Lazard had only limited information. So he raises a concern about that assurance. Do you accept that concern?”

Oliver Ellingham: “I think if we were to phrase that, we were happy that the assurance we had from Lazard, for a commercial transaction, was adequate.”

Ellingham: “As a board, we were faced with, we’re selling some assets and I’m sure any party would be able to find reasons why an advisor needed to be given lots more information to give us an opinion. What we were asking for, was an opinion from Lazard as to whether we were selling in a competitive process and getting fair price.”

Connolly: “How could you possibly rely on an assurance where you’ve given limited information.  Where you know that Pimco have withdrawn? Sorry now, and then you come back and you even  today tell us that you’re reassured by that assurance?”

Ellingham: “What we were trying to do was to sell some assets for a particular sum of money….”

Ellingham: “...in order to pay down debt. And therefore, we had an assurance that provided we got over 1.3million [sic] then that was the right price in the marketplace and the buyer was capable of buying it. We were not, for us, it was a commercial transaction and for Lazard to opine on the mass of the situation, that’s not, we didn’t think it was relevant for them to be told why Pimco had withdrawn.”

Soffe: “Well, there were two to the end and as we have said, that is not uncommon. Even if you look at, processes, like Project Eagle, there were two at the very end and that’s quite normal…”

Soffe: “That was dealt with and out of the way and it had nothing to do with the remaining process.”