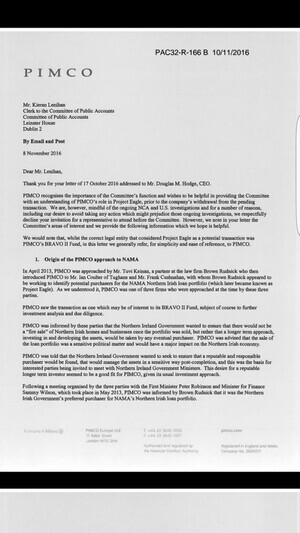 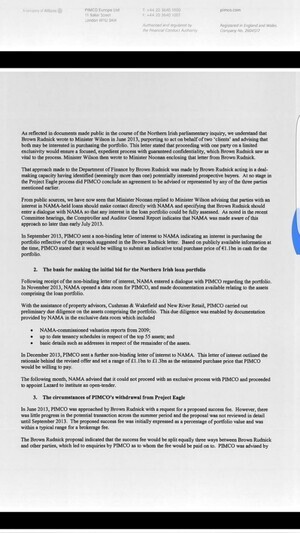 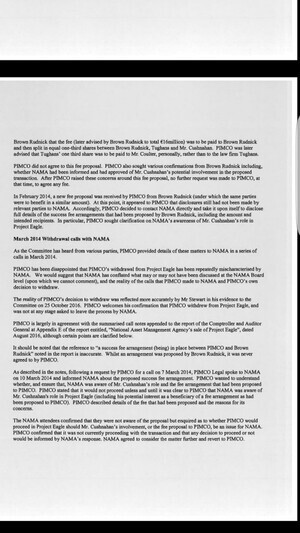 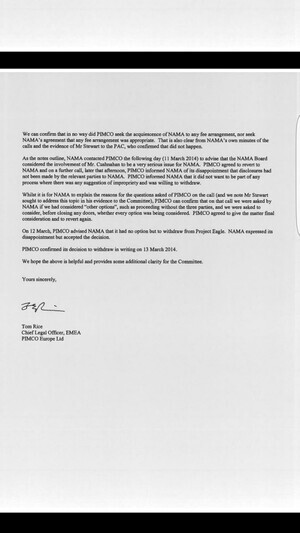 A letter Pimco has sent to the Public Accounts Committee

At the Public Accounts Committee (PAC).

The committee briefly discussed a letter sent to PAC by Pimco – one of the bidders for Nama’s Northern Ireland property loan portfolio until it learned of a fixer fee arrangement.

The arrangement involved a sum of £16m to be split US lawyers Brown Rudnick, Belfast law firm Tughans and Frank Cushnahan, a former member of NAMA’s Northern Ireland Advisory Committee.

On July 9, 2015, Nama chairman Frank Daly told PAC that once it (Nama) became aware of the fixer fee arrangement and Frank Cushnahan’s alleged involvement in March 2014…

“…that’s why we threw Pimco out, or sorry, got Pimco to withdraw,”

However, Pimco contests this and, in the letter above, says not only did Pimco withdraw from the sale, of its own accord, Nama attempted to convince Pimco to continue with the sale despite knowledge of the fixer fee arrangement.

“Pimco has been disappointed that Pimco’s withdrawal from Project Eagle has been repeatedly mischaracterised by Nama. We would suggest that Nama has conflated what may or may not have ben discussed at the Nama Board level (upon which we cannot comment), and the reality of the calls that Pimco made to Nama and Pimco’s own decision to withdraw.

The reality of Pimco’s decision to withdraw was reflected more accurately by Mr [Alan] Stewart in his evidence to the committee on 25 October 2016. Pimco welcomes his confirmation that Pimco withdrew from Project Eagle, and was not at any stage asked to leave the process by Nama.

Pimco is largely in agreement with the summarised call notes appended to the report of the Comptroller and Auditor General at Appendix E of the report entitled, ‘National Asset Management Agency’s sale of Project Eagle’, dated August 2016, although certain points are clarified below.

It should be noted that the reference  to “a success fee arrangement (being) in place between Pimco and Brown Rudnick” noted in the report is inaccurate. Whilst an arrangement was proposed by Brown Rudnick, it was never agreed to by Pimco.

The Nama attendees confirmed that they were not aware of the proposal but enquired as to wether Pimco would proceed in Project Eagle should Mr Cushnahan’s involvement, or the fee proposal to Pimco, be an issue for Nama. Pimco confirmed that it was not currently proceeding with the transaction and that any decision to proceed or not would be informed by Nama’s response. Nama agreed to consider the matter further and revert to Pimco.”

We can confirm that in no way did Pimco seek the acquiescence of Nama to any fee arrangement, nor seek Nama’s agreement that any fee arrangement was appropriate. That is also clear from Nama’s own minutes of the calls and the evidence of Mr Stewart to the PAC, who confirmed that did not happen.

As the notes outline, Nama contacted Pimco the following day (11 March 2014) to advise that the Nama Board considered the involvement of Mr Cushnahan to be a very serious issue for Nama. Pimco agreed to revert to Nama and on a futher call, later that afternoon, Pimco informed Nama of its disappointment that disclosures had not been made by the relevant parties to Nama. Pimco informed Nama that it did not want to be part of any process where there was any suggestion of impropriety and was willing to withdraw.

While it is for Nama to explain the reasons for the questions asked of Pimco on the call (and we note Mr Stewart sought to address this topic in his evidence to the committee) Pimco can confirm that on that call we were asked by Nama if we had considered “other options”, such as proceeding without the three parties, and we were asked to consider, before closing any doors, whether every option was being considered. Pimco agreed to give the matter final consideration and to revert again.

On 12 March, Pimco advised Nama that it had not option but to withdraw form Project Eagle. Nama expressed its disappointment but accepted the decision.

Pimco confirmed its decision to withdraw in writing on 13 March 2014.

Responding to Pimco letter a Nama spox ‘rejects any suggestion that it did not set out the circumstances of Pimco’s withdrawal accurately.’

5 thoughts on “‘Repeatedly Mischaracterised By Nama’”