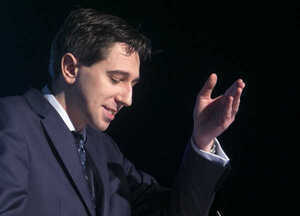 Minister for Health Simon Harris (above) on Newstalk’s Breakfast this morning. The number of people on hospital trolleys remains at over 600 today.

….Except the HSE had warned that the winter initiative could be ineffective if there was an outbreak of flu, bad weather and so on in their draft plan

The HSE had been keen to say that targets set in the initiative might not be met depending on circumstances.

In particular, they had warned of “unusually high demand” particularly among older people, the potential for flu, and the possible impact of weather conditions.

And what did the Department of Health do? They asked that this warning be moved prior to publication of the plan so they could emphasise the “positive effects” of the initiative.

The Cycle Of Irish Life