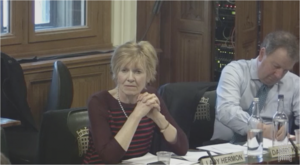 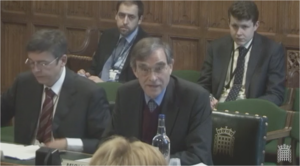 At the Northern Ireland Affairs Committee.

During her questioning, Ms Hermon recalled the UK prime minister Theresa May’s visit to Dublin on Monday and her stating that both the UK and Irish governments want a “seamless, frictionless border” between Northern Ireland and the Republic of Ireland.

She also asked Mr Lux if he had ever visited the south Armagh border between Northern Ireland and the Republic. He hadn’t.

Michael Lux: “Yes, but Ireland has to do so. What you do on your side, okay, that’s up to you. If you feel that you don’t need to control the goods which are entering Northern Ireland and have to recover VAT and customs duties and excise duties, you are, of course, free not to do that. But Ireland is obliged to do this.”

Hermon: “So, how could, how could the prime minister achieve a seamless, frictionless border? Is it achievable?”

Hermon: “I think what I’m also asking is the fact are, will the UK be required to have checkpoints and checks on goods, commercial goods, people?”