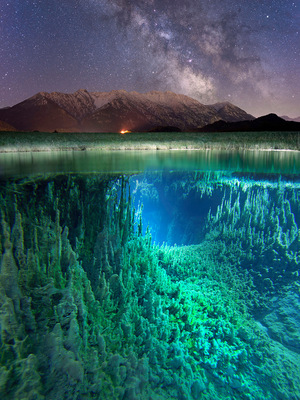 A composite image taken last October by Johannes Holzer at the Isar river in southern Germany. The image was achieved using two cameras shooting three photos from roughly the same perspective, which were then stitched. To wit:

..[the] sky with a Sony A7r and Vixen Polarie Startracker, one additional shot for the landscape without [a] Startracker, [and] underwater was done with a Canon 5Dm2 with an EWA Underwater case.

2 thoughts on “River Of Stars”