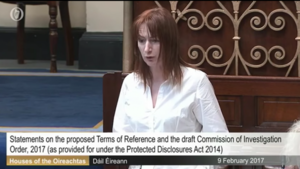 In the course of the interview, Ms Daly said the following:

“I suppose, it’s worth saying, there have been other dealings with Tusla in relation to other Garda whistleblowers as well, that we know of…”

Readers may recall how the terms of reference of Justice Peter Charleton’s commission of investigation into allegations of a smear campaign against Sgt Maurice McCabe were published earlier this week.

And that one of the terms of reference calls for the investigation to find out if “Commissioner [Noirin] O’Sullivan, using briefing material prepared in Garda headquarters, planned and orchestrated broadcasts on RTE on the 9th of May, 2016, purporting to be a leaked account of the unpublished O’Higgins Commission Report, in which Sgt McCabe was branded a liar and irresponsible”.

This was in reference to an interview between RTE journalist Fran McNulty and RTE’s Crime Correspondent Paul Reynolds on Morning Ireland on the morning of Monday, May 9, 2016 – about the then as yet unpublished O’Higgins report.

Mr Reade also asked Ms Daly about what she said in the Dáil yesterday, concerning the inclusion of this report in the terms of reference.

I welcome some of the other terms of reference. I am delighted to see RTE included, because I actually made a complaint about that broadcast. RTE wrote back to me and gave out about the personal nature of my complaints and their hostile tone. It claimed they were without foundation and would be defamatory if I repeated them to a third party.

During the LMFM interview…

Michael Reade: “You told the Dáil yesterday that you made a complaint about the broadcast to RTE. RTE wrote back to you and gave out about the personal nature of your complaints and the hostile tone and I know that because I saw you saying that on RTE News last night. But that’s where the report stopped. And what I didn’t see on the news was what you went on to say, which was that, RTE claimed, that what you were saying was without foundation and would be defamatory if you repeated it to a third party. Was RTE threatening to sue you?”

Clare Daly: “No, I don’t think so. I think they were objecting strongly or the person from RTE who wrote it, like, was saying that, you know, if I was to repeat what I said in the complaint to a third party, it might be construed as defamatory which was just utterly ridiculous, as far as I was concerned. It was in the context of the news report and coverage and the complaint had been about the coverage by Paul Reynolds and, basically, the person who wrote back from RTE was making that remark to me, in the context of defending Paul Reynolds, telling me what a wonderful journalist he was and how he knew him well and…”

Reade: “…is that not suggesting you were making libellous statements which means they could choose to sue you?”

Daly: “Yeah, I mean, look it, I thought the choice of words was incredible and, as I was saying in the Dail, I was really glad that Justice O’Neill had included that coverage because a lot of people took exception to it, it was incredibly one-sided and it gave a very inaccurate account of what was actually in the O’Higgins’ report which is why we put in the complaint at the time…”

Listen back to the interview on LMFM in full here

22 thoughts on “‘Dealings With Tusla And Other Garda Whistleblowers’”