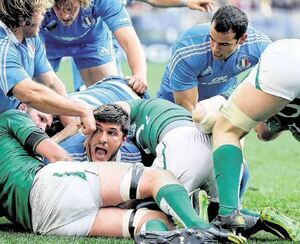 Italy, the dreaded banana skin of the 6 Nations, fells a stunned Ireland.

The most dejected trudge yet from the dressingroom to the coaches in the tunnel of the Stadio Olympico fittingly resembled another scene from MASH. A dazed and Luke Marshall followed by Keith Earls, his arm tucked under his tracksuit top. Luke Fitzgerals went by on crutches, his leg entirely encased. The ravages of the Six Nations campaign will be felt for some time.
A host of new men have been thrust into this ravaged squad, with the carnage of Saturday providing them with scenarios that they could not of imagined or experiencing in their fledgling careers to date…