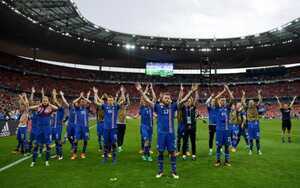 When Iceland beat England in the last 16 of Euro 2016, it marked one of the most famous days in its footballing history – and one doctor has spotted a clue as to how the country might have celebrated.

Asgeir Petur Thorvaldsson, a doctor in the anaesthesiology department at Landspitali University Hospital, Reykjavik, tweeted that his maternity ward had administered unprecedented levels of pain relief over the weekend – coincidentally nine months exactly since Iceland’s 2-1 victory over England.

Roughly translated, Mr Thorvaldsson said: “Set a record for the number of epidurals in the maternity duty this weekend.”

Iceland’s most glorious moment was the defeat of England in the first knockout round, while their fans provided one of the signature sounds of the tournament – the “Thunderclap” celebration.