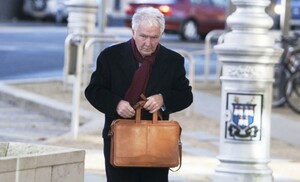 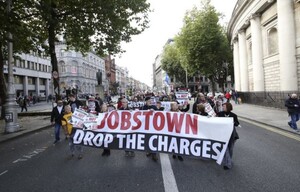 Developments in the trial of the ‘Jobstown 23’ – for the alleged ‘false imprisonment’ of then Tanaiste Joan Burton – have put the right to a ‘jury of your peers’ under threat.

On that basis, juror 791 was excluded.

Now for the first adult false imprisonment #JobstownNotGuilty trial, the DPP is trying to stack the jury against the defendants. They have written to the seven defendants’ solicitors putting forward a proposed formula for excluding jurors, on an extraordinarily wide basis.

“People from the Jobstown/Tallaght area and people with such connections to the area as would give rise to a concern that they could not deal with the case impartially.”

“Persons who are active in any campaigning groups either for or against water charges (whether formal or informal).”

“Persons who have expressed themselves in public, whether on the Internet, in the print media (newspapers), broadast media (radio or television), on social media (including Facebook, Twitter, on-line comment pages of websites or newspapers or any other form of social media) or otherwise on publically available mediums, on issues concerning water charges and/or the events on the 15th November 2014….”

It could even be stretched to exclude every member of a trade union, given that it is ICTU policy to oppose water charges.

Similarly, ruling out those who have expressed themselves on water charges publicly would disproportionately exclude those against water charges and younger people who are more likely to be active on social media.

What is being attempted is blatant – to exclude as many working class people and those against water charges.

On what grounds can it be suggested that people expressing views on water charges makes them incapable of being impartial in what is supposed to be a ‘false imprisonment’ trial?

Worryingly, the trial judge in court on Friday, March 31 described the DPP proposals as “very sensible”. A different judge, Judge Ryan, will make a decision on the proposal to exclude people from the jury on the first day of trial Monday April, 24.

Yet in Fitzpatrick’s case, the jury was stacked in his favour. In the Jobstown case, the DPP is going all out to stack it against the defendants.