The Dáil will today debate a motion on the final report while TDs will vote on the motion tomorrow. 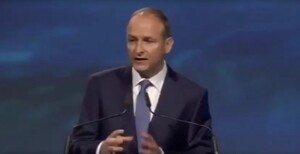 56 thoughts on “They Think It’s All Over”