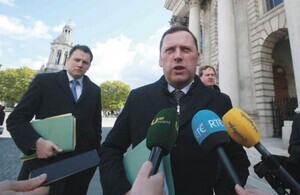 On Monday, Derek Mooney speculated on the possible outcome  of a deal between Fianna Fáil and Fine Gael suggesting water charges were dead for both parties.

While the agreement on the future funding of domestic water as hammered out at the Oireachtas committee is not a bad one – the issue now is more about the process and the path to its arrival.

It proves the truth of the old adage, usually attributed to Bismarck: if you want to keep your appetite then there are two things you should never watch being made: laws and sausages.

The Committee report does include an important climbdown from the government that now accepts that there should be a future referendum on the public ownership of Irish Water.

The fate of individual metered water charges was sealed politically at the last election and sealed technically at the committee with the evidence given by the officials from Scottish Water.

Scotland does not have individual metering, the charge comes from the council tax (in our case from income tax) and they are held to be in compliance with EU Directives.

Most discussion at the Committee since that evidence has been a proxy battle between Fianna Fáil and Fine Gael fought on extremely narrow grounds via lawyers and competing legal advice.

The outcome was a draw nil all draw, not that the result matters too much as the crowds had been so frustrated and irritated by the carry-on on the pitch that they stopped watching and went home ages ago.

The only outstanding questions are: why did no one in Government look at the Scottish model before now and what was all that furore and activity between 2011 and 2016?

Expensive wasted water under the bridge it seems.

Earlier: They Think It’s All Over

36 thoughts on “Water Under The Bridge”