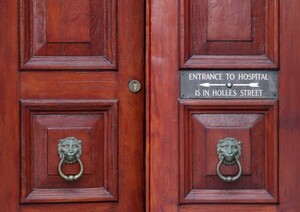 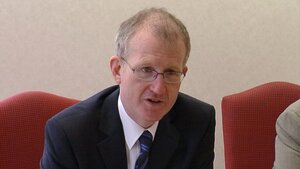 You may recall how last April, Justine McCarthy, in The Sunday Times, reported that the Religious Sisters of Charity-owned St Vincent’s Healthcare Group (SVHG), at that time, was demanding that the new National Maternity Hospital agreed to “become a branch of its corporate structure” before allowing the planned co-location in Elm Park to go ahead.

On the same day, April 24, 2016, the newspaper published an editorial stating:

“The Religious Sisters of Charity must not be allowed to get away with their audacious attempt to take control of the State’s maternity services. The potential risks this power grab presents to the health of women and girls are too serious to allow for any complacency by the incoming government.”

During their discussion, Prof Fitzpatrick said:

Yesterday Prof Fitzpatrick resigned from his position on the project board for the new National Maternity Hospital.

This morning, he spoke to Cormac Ó hEadhra, who was filling in for Seán O’Rourke, on RTÉ Radio one.

Ó hEadhra: “Now it’s been outlined in various headlines, but you tell me, in your own words, why you resigned.”

Fitzpatrick: “Well, firstly, I’d like just to clarify one point. I think, on this morning’s bulletin, it said I was appointed by the HSE to plan the hospital. My role is limited. I sit on the project board and I represent the clinical programme of obstetrics and gynaecology. So I bring a national, clinical perspective to the co-location but I don’t have overall responsibility for it. I just make a contribution. I would like to clarify that point. I suppose I was concerned and I have been concerned in relation to the ownership and the governance model as has emerged from the recent negotiations and I very much shared the viewpoint of Dr Peter Boylan and felt that I had no alternative other than to resign from my position on the project board. I’d like to emphasise that I registered my concern in relation to this almost a year ago to the day.”

Fitzpatrick: “I spoke in a public forum in relation to it. I spoke to the media in relation to it and was encouraged by the National Maternity Hospital to address their concern in relation to the governance structures that were being discussed at the time with St Vincent’s Healthcare [Group].”

Ó hEadhra: “And your concerns then related to influence or ownership?”

Fitzpatrick: “It concerned ownership and control of the hospital. And, certainly, my viewpoint was, and I think that at the time, the National Maternity Hospital very much shared that viewpoint, is that they should have, in fact, control of their own hospital. That it should exist in a co-operative partnership with St Vincent’s hospital.”

Ó hEadhra: “But are you, do you not take on board, there were 24 members, I believe, at the National Maternity Hospital board meeting last, two or three nights ago, and they again discussed the whole thing following recent statements by Sister Agnes [Reynolds], Bishop [Kevin] Doran and the St Vincent’s Hospital Group [SVHG] and so on. And a huge majority of them, I think, voted to re-endorse the terms of agreement and so on. Are you not reassured by that?”

Fitzpatrick: “Unfortunately, I’m not reassured by it. And I suppose the other issue, and it’s important to emphasise, is that none of these deliberations, discussions, in relation to governance or ownership should, in any way, derail, decelerate the project. It’s absolutely essential that the National Maternity Hospital co-locates on St Vincent’s hospital, this is the ideal site for it. And these discussions should not be used as an excuse to slow down the process but I think..”

Ó hEadhra: “You think it should go ahead even though it’s fundamentally wrong?”

Fitzpatrick: “I think that there is an opportunity to resolve the issue and the relationship between both hospitals is more important than, it has a very, it has a national significance in that, this is the first maternity hospital to emerge out of the new Government strategy. This is the first maternity hospital being built in this century. So I think it is absolutely critical, in relation to maternity services, that there must be an absolute distinction or separation between church and medicine, particularly when it comes to female reproductive healthcare.”

Ó hEadhra: “But are you not reassured by Dr Rhona Mahony and Nicholas Kearns when they say it’s in the terms of agreement between the two hospitals, mediated by Kieran Mulvey. It’s in black and white, Rhona Mahony said. We will have autonomy and independence.”

Fitzpatrick: “Well, I’ve been a consultant for over 20 years and I was a Master of a Dublin maternity hospital for seven years and I would have found it very difficult to operate in a clinical, with clinical independence under a board that was constituted as the proposed board would be constituted.”

Fitzpatrick: “Because it is constituted, it, the membership of the board has [inaudible]. There are nine members of the board, four appointed by St Vincent’s Hospital, four by the National Maternity Hospital and an independent chair. I believe that’s not the way to appoint a board. It’s also the board that, in fact, the ownership of the hospital is with St Vincent’s Healthcare Group. Now, I would think there’s sufficient ambiguity. There’s sufficient division on that board to in fact cause concern. It is a compromise deal. And..”

Ó hEadhra: “Doesn’t it, Dr Fitzpatrick, doesn’t it have to be? Because it’s a compromise between two hospitals? The new hospital is going to be on lands owned by the St Vincent’s hospital.”

Fitzpatrick: “I think, to the casual bystander, to have a maternity hospital in 21s century Ireland, owned by a religious organisation, who have a very  significant, controlling influence on the board, where they will have in fact four representatives out of nine. And also in terms of how the chair is elected, they’ll have significant influence in relation to that and, to hear references to triple lock systems and reserved powers and golden shares being held by a minister and adjudication between board, in relation to grievances, this is not the way to run a hospital.”

Ó hEadhra: “Does that not all guarantee the independence, the autonomy?”