From top: Taoiseach Enda Kenny in Toronto this morning and excerpts of a Dáil transcript from April 1, 2014

A contradiction has emerged in Taoiseach Enda Kenny’s assertion that he raised the question of women’s rights during a visit to Saudi Arabia in 2014.

Mr Kenny told journalists in Canada that he had raised the issue during a trade mission.

However the Dáil record from the time shows the Taoiseach told Opposition deputies that the subject was not discussed [see above].

The Taoiseach led a trade mission to Saudi Arabia in January 2014 – a trip which led to the signing of €65m in contracts, and the creation of 95 jobs. 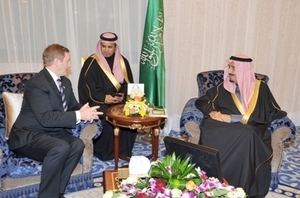