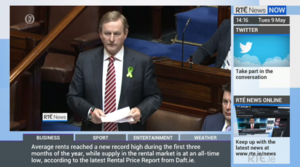 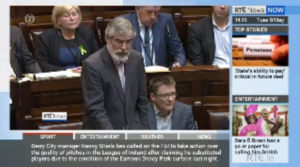 The leader of Sinn Féin Gerry Adams told the Dáil new documentation has been provided to the Public Accounts Committee (PAC) by the executive director of human resources and people development at An Garda Síochána John Barrett.

Readers may recall how Mr Barrett last week told PAC, in the presence of Garda Commissioner Nóirín O’Sullivan, that he held a meeting with Ms O’Sullivan for “over two hours” in which he raised issues about the Garda College in Templemore, while Ms O’Sullivan, in contrast, said it was “brief” while she has “having tea”.

During his exchange with Mr Kenny.

Gerry Adams: “Taoiseach, I understand that documentation has been given to the Public Accounts Committee by John Barrett, which completely contradicts and undermines the account given by the [Garda] Commissioner OSullivan last Thursday about her conversations with Mr Barrett over financial irregularities at Templemore. And this latest development today comes after contradictory statements from the Commissioner O’Sullivan and the executive director of human resources, the aforementioned Mr Barrett. So I want to ask you: why you would then end the never-ending crisis and scandal surrounding the senior management of An Garda Siochana.”

Adams: “Taoiseach, the Commissioner’s position is untenable but it’s not easy to understand why you will not remove her from office. There’s no rational explanation. The majority of parties here in Leinster House now want the Commissioner to go and you need to act in the best interests of An Garda Siochana, for the sake of the people of this state, the Commissioner needs to go and go now. So, will you finally accept this reality and relieve Noirin O’Sullivan from her duties as Commissioner, if she refuses to resign.”

“This morning, the Cabinet approved the nomination of Kathleen O’Toole, who is the chief of police in Seattle, to chair the review body dealing with the, with An Garda Síochána. She is an outstanding person of very great experience, both in the legal terms, in policing terms, with a deep understanding of the position that applies here in Ireland. I would expect that nomination to be ratified by Cabinet next week.”

“In addition, the Cabinet also approved this morning the terms of reference for Project Eagle which was a matter that was raised by people here on a number of occasions and, following receipt of further observations, from the Fianna Fail party, and Deputy Wallace, I took those account and had approval given for the terms of reference for that. These are actions that are being taken by Government in respect of matters of public concern.”

Previously: Why The Long Face?