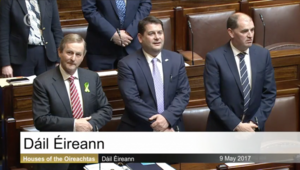 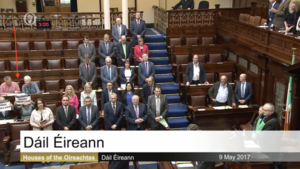 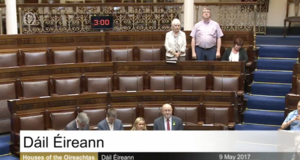 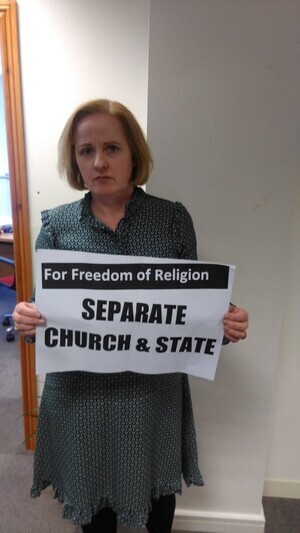 Mr Barry and Ms Coppinger (above) held up signs with the message, “For freedom of religion,  separate church and state”.

The Dáil prayer is:

Direct, we beseech Thee, O Lord, our actions by Thy holy inspirations and carry them on by Thy gracious assistance; that every word and work of ours may always begin from Thee, and by Thee be happily ended; through Christ our Lord. Amen.

Related: Fintan O’Toole: State has taken a bizarre trip back to the 1950s (The Irish Times)

It disgusts me as an Irish citizen that the catholic church can infiltrate with the help of the conservative christian right wing parties of Fianna Fáil and Fine Gael a prayer that makes absolutely no sense to the people of Ireland.

Fair play to any politician for sitting their ground today. Instead of standing for the Dáil prayer. These rebel politicians that our Republic needs right now can stand and recite this profound paragraph of the proclamation.

A Moment Of Clarity
‘The Republic guarantees religious and civil liberty, equal rights and equal opportunities to all its citizens, and declares its resolve to pursue the happiness and prosperity of the whole nation and of all its parts, cherishing all of the children of the nation equally, and oblivious of the differences carefully fostered by an alien Government, which have divided a minority from the majority in the past.’

52 thoughts on “We Beseech Thee”