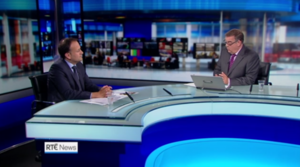 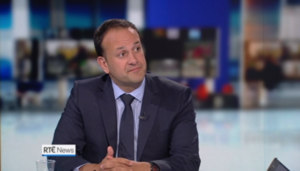 Leo Varadkar and Brian Dobson on last night’s Six One

Following his ‘Welfare Cheats Cheat Us All’ campaign…

Fine Gael TD and leadership contender Leo Varadkar spoke to Brian Dobson about people in Ireland who “want everything for free”.

Leo Varadkar: “Well, I suppose, they’re people who do exist in Ireland, unfortunately, there is a degree of an entitlement culture. It mightn’t be many people but there are people who believe and, you know, they’re very often supporters of the far left, that believe that everything should be free. And that, you know, somehow, Apple or bondholders or somebody else should pay for it, or billionaires who don’t live in this country. And I don’t accept that culture.

“I think, I come from a very different political point of view. I think everyone who can should pay into the system and by paying into the system, we can all have a better society.”

Dobson: “So they’re people on the hard left? A pretty small group then? Would it be fair to say?”

Varadkar: “Yeah, they’re pretty small but they’re loud and they’re growing and the kind of politics they preach is the idea that we should have, you know, free education, free healthcare, free housing, free everything but you shouldn’t have to contribute to it at all. Somehow that, you know, billionaires living overseas or American corporations, that make their profits elsewhere, are going to pay for everything. I think that’s dishonest.”

Previously: Populist Chancer Cheats Us All