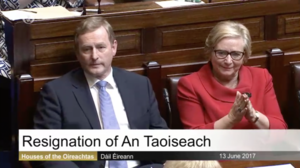 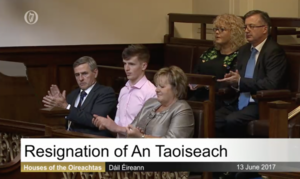 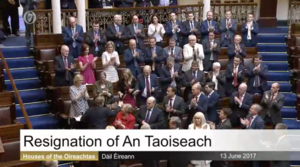 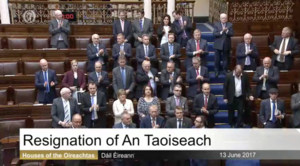 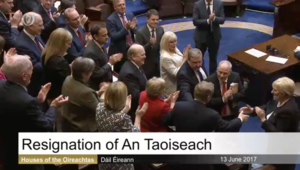 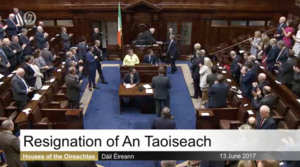 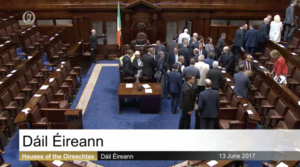 Scenes from inside the Dáil chamber after Taoiseach Enda Kenny gave his resignation speech, followed by speeches about Kenny’s tenure from party leaders and party representatives. 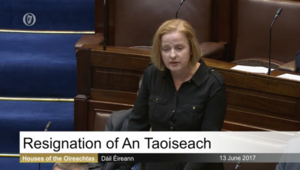 About how a young pregnant girl, who was at risk of suicide, was sectioned – after she sought an abortion.

Ruth Coppinger: “Taoiseach, honesty in politics is important so I’m not going to engage in fake, back-slapping. I will congratulate you on writing your own speech which I believe you did. I was a bit bemused at you mentioning Michael Davitt, a revolutionary and a socialist but we’ll leave that aside.

“In summing up your legacy, Taoiseach, I could focus on six years on unprecedented austerity, suffered by the many to bail out the few or the massive homeless and health crisis that you’re laving in your wake. Or indeed the crisis in the gardai and in the State.

“But, in the short time I have and the day that’s in it, I’ll pick one issue that sums up completely the type of Ireland that you and the establishment that you’ve so ably represented have bequeathed in the five decades you’ve been in the Dáil. And that is the incarceration, internment and imprisonment of a vulnerable, pregnant teenager, who asked for an abortion and who asked for help.

“Twenty-five years ago, this nation rose up at the incarceration of a teenage rape victim but it’s still happening under your watch because you did nothing to make sure it wouldn’t happen again.

“The much heralded Protection of Life During Pregnancy Act that you and the Labour party boast about has proven impossible for any suicidal person to access an abortion because they’re put through an inquisition. Their feelings are ignored and their rights to bodily and mental autonomy are completely ignored. And this happened last year. We do not know what happened to this girl, whether she succeeded in getting an abortion or whether she was forced to remain pregnant.

“Now Taoiseach, we’ve a history in this country, it’s been mentioned today, of incarcerating pregnant women and girls and we thought that that era was over but many people have been outraged over what they’ve found out over the last 24 hours – that a psychiatrist would have the power, with their own views, to section a girl for the crime of wanting not to be pregnant.

“It seems it’s an illness warranting being locked up, to want an abortion. Not alone that, Taoiseach, but it appears a judge adjudicated and heard this case and awarded a guardian to the girl and, wait for it, her foetus. Now…”

Ceann Comhairle Seán Ó Fearghaíl: “I don’t want to interfere with any member’s contribution today. But I’m afraid you’re venturing into territory that is completely at odds with the business that’s before us today.”

Coppinger: “With the legacy of the Taoiseach?”

Ó Fearghaíl: “I, you’re talking about a specific case which none of us have full information.”

Coppinger: “Yeah. I, ok, thank you, Ceann Comhairle, I’ll bear that in mind. I’m going by the information that we do have and I’m just generalising now. So, not alone that Taoiseach, a judge adjudicated on the case, as I said. But Taoiseach, you’re going and what I hope is the reactionary policies are going with you. That the backwardness that was visited on young people in this country for so many decades will also go. You’ve had your time, hopefully we’ll have a different time.

“That the yearning there is for a different type of society among young people in particular, can be brought about. And, in finishing Taoiseach, I hope we see a movement now to bring about the separation of Church and State and the type of legislation that gives the person involved the right to make this decision for themsevels. And, hopefully, that movement won’t take very long.

“With your new incumbent, we’ll find out but I certainly would encourage people to actively ensure that it happens because we can’t trust the people in this Dail to ensure that these cases don’t happen again.”

Previously: ‘Not The Solution’