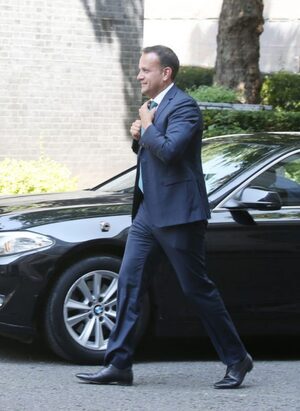 And though silage was not exactly plentiful in the Liberties, Rathmines or even Yellowbatter in Drogheda during my childhood years, I think I know what she means.

Indeed, up to this morning I hadn’t realised that silage is spelled with just one “l”. Though I cannot recall using the word in many speeches, reports or articles I am virtually certain that I used two “l”s anytime I have written it.

I know for sure that I used two “l”s when I went searching for the phrase just before writing this piece, only to discover that the two “l”-ed version of silage, i.e. sillage (pronounced as if there were no “l”s at all in the word) is the word used to describe the lingering fragrance that someone’s perfume leaves in the air.

Silage and ice-cream may also be an apt phrase to describe Leo Varadkar’s first few days as Taoiseach.

The ice-cream has come in the form of the positive coverage his elevation to high office has generated, both at home and abroad, though that may be starting to melt a bit after two solid weeks of learning what a wonderfully precocious child he was and how he wrote his first letter to the Irish Times aged three, or whatever.

His first TV interview with Tommie Gorman was good. He was clear, concise and on top of his brief. The fact that he opted to do his first one-to-one TV encounter as Taoiseach with RTÉ’s northern editor was clearly intended to signal that the North would be a priority with this Taoiseach in a way that it had not been for his predecessor.

It was also interesting that he opted to set out his government’s policy approach to the North and re-unification himself having just appointed his rival, Simon Coveney, as the line minister dealing with the brief, a signal perhaps of things to come.

But, and not for the first time, a gap emerged between what he says and what he does.

His decision to just meet with the leaders of two of the North’s five major political parties was not a good first move. In using his first actions on the North to meet with just Arlene Foster of the DUP and Sinn Féin’s Michelle O’Neill, and not to meet with the leaders of the other three centre ground parties: the SDLP, UUP and Alliance, the new Taoiseach was perpetuating the mistake made by recent Irish governments.

Yes, a deal on the return of Stormont and the Executive is not possible without the two big beasts of the DUP and Sinn Féin agreeing to again work together, but the smaller parties should not be taken for granted.

Even the British government realised that when it invited all the parties to Downing Street last Thursday, not just the big two.

Taoiseach Varadkar made a silly unforced error in appearing to relegate the smaller parties to the second division of negotiation. Their participation in the institutions is as important and crucial as that of the DUP and SF. If anything, the events of the second half of last year suggest that it is even more important, as the two main parties seem unable to reach accommodations in office without the smaller parties there to give them cover.

Varadkar should know this. He sits at a Cabinet which could not continue in office if it were not for the involvement of smaller parties and Independents though, as we see from today’s latest development in the Marie Whelan appointment saga, he may know it, but he doesn’t show it.

The incredible, some would say grubby, rush to get Marie Whelan quickly sworn in as a judge of the appeal court this morning so that the sorry saga is all over and down before tomorrow’s Cabinet meeting is a brazen throw down to Ministers Ross and Naughten and – by extension to Fianna Fáil.

Is this just Varadkar bravado, showing early on that he is now the boss and what he says goes? Or, is the nomination a difficult, but essential, element of the succession’s realpolitik that he must see through to the end, no matter how the stench adheres to him? I suspect this is more the latter.

Those who say that Leo has wiped Fianna Fáil’s eye by pushing this through seem to miss the point that this appointment, coupled with the fiasco of the cabinet reshuffle that wasn’t, has just shortened what could have been an extensive Varadkar honeymoon.

As every job interviewee had been told: you only get one chance to make a first impression and Leo has wasted his.

Meanwhile, Fianna Fáil will wait for its moment to exact some political revenge and that will be a moment of its choosing, not Leo’s. If Fianna Fáil is to bring down this government let be on an issue of policy that affects people’s lives, not “beltway” process.

The Marie Whelan saga was not of Varadkar’s making, but his ownership of a move that looks suspiciously like a vintage political stroke, is now 100%.

The appointment was brought to Cabinet as the last act of the outgoing Taoiseach and outgoing Justice Minister, but by defending it so fiercely the new Taoiseach has made it his own… alone… and, unless I am missing something, I have not seen the new, sorry… the incoming… Minister for Justice, Charlie Flanagan, (it hardly seems right calling someone who has been in the Dáil since 1987 “new”) rushing to the barricades to help.

If Varadkar has been preparing all his political life for this moment, then it is hard to believe that this is what he had planned.

We shall see tomorrow how he handles the even trickier issue of appointing Junior Ministers. Will he be bold and courageous in these hardly earth-shattering selections, or will he just do what he did with the cabinet?

Are these first faltering steps a case of the promises made to secure election restricting the ability to operate, or is the problem more fundamental? Can Varadkar be the thrusting and dynamic Taoiseach his Fine Gael parliamentary colleagues longed for, or will he just become the commentator-in-chief?

Is that the sillage of silage or of raspberry ripple ice-cream. Excuse me, I must be off to Teddy’s in Sandycove!

4 thoughts on “The Honeymoon Is Over”