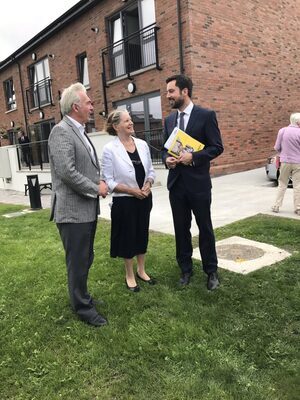 Remember former Minister for Housing Simon Coveney’s claim that he would ensure  all homeless families would be out of hotel accommodation by July 1?

Minister for Housing Eoghan Murphy has said the Government is going to miss its deadline of 1 July for moving homeless families from temporary hotel accommodation.

He said the 650 families involved will be moved straight into family hubs or other accommodation or they will be notified in writing of where they are going in the coming weeks.

…Mr Murphy was speaking at the opening of 28 housing units in the grounds of Harold’s Cross Hospice in Dublin. The units are owned and operated by Focus Ireland and built on a site donated by the Sisters of Charity.

Mr Murphy said that the review of Rebuilding Ireland is continuing and it is a good time to look at what new measures or powers might be needed. He said the Taoiseach has told him to think big and no idea is too radical.

“The issue of Lynam’s Hotel on O’Connell Street which is currently being modified to become a family hub to house homeless families. A constituent contacted my office yesterday, very distressed, that she, along with her two young boys, were placed in Lynam’s Hotel late on Monday night. They arrived to find the place without running water or electricity in the room and she felt very unsafe.”

“I understand that Lynam’s is being offered as a late-night solution when no other family accommodation can be found, instead of sending families to Garda stations as has happened recently. Yet, Lynam’s is still a building site.

“Anthony Flynn, of Inner City Helping Homelessness charity, went to the property yesterday with Dublin Fire Brigade and I understand that a full inspection is being carried out today. And there’s a photo on social media of a fire escape chained shut and I understand members of the fire brigade did declare the building a fire hazard last night.

“But, in the light of this, and I also understand young students and family, including four children, minister, were today evacuated from 24, Mountjoy Square over safety issues and that a fire safety notice was issued for this property in August 2016, so minister can you now outline what other occupied properties around Dublin have fire safety notices indicating the address and date of issue for the fire safety for each property. How can tenants be left in a property which has had a fire safety notice for almost a year? I’ve asked your senior minister, Deputy Murphy, to act urgently on this.”

‘I’ve No Evidence In My Department’