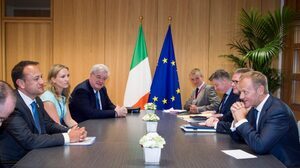 “That is ultimately a decision for them, however, and that may change. Countries can take positions, often very strong positions, they are often negotiating positions, and yet the final outcome might be more favourable.

While Britain says they intend to leave the customs union and the single market, they also say they want a Free Trade Agreement, and while many of the elements of a free trade agreement, while not being the same as the customs union, may not be that far from that.”