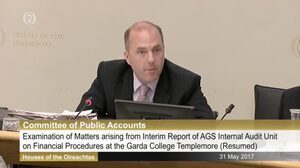 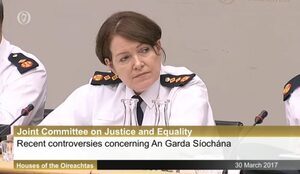 You may recall how Garda Commissioner Nóirín O’Sullivan has repeatedly told the Public Accounts Committee (PAC) that she first learned of the issues concerning the Garda College on July 27, 2015 when head of HR John Barrett briefed her and others.

Specifically, Ms O’Sullivan told PAC that, after she was briefed on July 27, 2015, she set up a working group to deal with the issues. But Mr Barrett also told PAC that a meeting on July 2, 2015 was “the first meeting of the steering group established to examine the issues”.

The Irish Independent is reporting that the Head of Legal Affairs Ken Ruane has written to PAC contradicting Ms O’Sullivan’s account of events from her most recent appearance before PAC last week.

During last week’s appearance at the PAC, Ms O’Sullivan said: “The fact is this [working] group was established and it was to go through the process of informing all the relevant parties, keeping the Department [of Justice] and everyone else informed of that.

“I entrusted the job, and the sequence with which that was done, to the group as it was established. It is my understanding that it is accepted practice that the Accounting Officer cannot have oversight and responsibility for absolutely everything.”

In his letter, Mr Ruane quoted this section of Ms O’Sullivan’s evidence.

He wrote: “In my personal capacity as an individual who was asked to be a member of this group, I do not accept and cannot agree with the statement made above by the Commissioner in the context of the process of ‘informing all the relevant parties’.”

4 thoughts on “Contradiction Once Again”