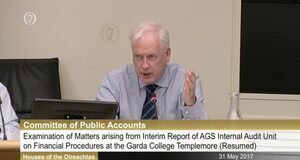 Head of HR at An Garda Siochana, John Barrett, speaking at a meeting of the Public Accounts Committee in May

The head of HR at An Garda Siochana John Barrett wrote an 88-page document to the Public Accounts Committee to assist it further in its inquiries into the financial irregularities at the Garda College in Templemore.

Fiachra Ó Cionnaith, in the Irish Examiner, reports that in his statement, Mr Barrett has told the PAC:

He was subjected to a “whispering campaign”, with his “reward for my persistence” in highlighting garda college financial concerns being “spurious criminal allegations” that he breached the Official Secrets Act by keeping notes on what he found;

That one senior garda sent him documents at the time of his discoveries about the garda college “to suggest that I was aware of all the issues at play and that I did nothing for a number of months”, a claim against Mr Barret that has been proven to be untrue;

That Ms O’Sullivan’s PAC evidence about when she was informed about the garda college concerns is contradicted by clear, private records from the period kept by Mr Barrett;

That garda head of legal affairs Ken Ruane and director of communications Andrew McLindon were subjected to “revised reporting arrangements” and different management structures after highlighting the college issue alongside Mr Barrett.

In a separate section of his 80-page letter, Mr Barrett also called for a forensic examination of the St Raphael’s Garda Credit Union since 1999, which he said is needed to uncover whether EU funds and other money related to the garda college passed through accounts.

He concluded by quoting a book called Lies In The Mirror by current Disclosures Tribunal chair Mr Justice Peter Charleton, in which the retired judge writes that “deceit is the primary instrument for doing evil”.

3 thoughts on “‘Deceit Is The Primary Instrument For Doing Evil’”