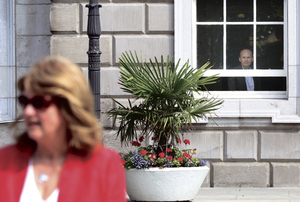 Paul Murphy TD, of Solidarity, in Leinster House as Joan Burton TD, of the Labour Party speaks to the media on the Dáil plinth after Tuesday’s budgetary oversight committee

Two weeks after the trial, the Irish Times accepts there may be something worth investigating in Garda evidence in #JobstownNotGuilty. pic.twitter.com/wjmQyiprSM

…. Confidence in the Garda Siochána is not an optional extra. It is the bedrock of public compliance and a properly functioning society. As a succession of scandals wash over the force, it is essential the public are assured that when gardaí give evidence in court, they speak nothing but the truth in accordance with their best recollection of sometimes fraught situations.

A Garda statement, saying a senior officer was conducting a review of organisational practices and policies arising out of Jobstown and “other issues of note”, may also have created the misleading impression that it would include evidence given in court. The Garda Commissioner made clear yesterday that this was not the case. A full Gsoc investigation is needed and Paul Murphy, if he is serious about anything other than crass political advantage, could usefully seek it.

A Case For Gsoc To Investigate (Irish Times editorial)

Will You Get Behind Us?