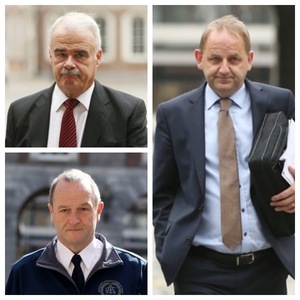 Judge Peter Charleton made the suggestion that if there was a meeting about the Leonardo da Vinci painting the Mona Lisa, and if Leonardo Da Vinci “was around”, the person organising the meeting would likely ask Mr Da Vinci to attend.

Mr Charleton raised the suggestion while Assistant Commissioner Kieran Kenny was giving evidence about a meeting which he organised in July 2014 in Mullingar Garda Station.

This meeting took place after Mr Kenny learned, in May 2014, that a rape allegation had been wrongly made against Sgt Maurice McCabe on documentation circulating between RIAN counselling, Tusla and An Garda Siochana.

Readers will recall that it was Insp Noel Cunningham who carried out the original investigation into Ms D’s claim of inappropriate touching in 2006, it was sent to the DPP and it was dismissed.

Judge Charleton made the point about Leonarda da Vinci in an effort to get an explanation from Mr Kenny as to why he didn’t invite Inspector Noel Cunningham to the meeting.

Mr Kenny said he had not “no issue” with Insp Cunningham’s investigation.

Judge Charleton asked if Mr Cunningham was ostracised and if there was something that he [Judge Charleton] wasn’t aware of. He wanted to know why he was excluded.

Mr Kenny: said: “I didn’t exclude him, I just didn’t include him.”

Why does this matter?

Readers will note that the tribunal has heard it was Mr Kenny who, according to evidence given to date, was the final link in the chain regarding the journey of a false rape allegation against Sgt Maurice McCabe from RIAN counselling service, to Tusla, to gardai and, finally, to the then acting Garda Commissioner Noirin O’Sullivan.

Readers will recall how the tribunal has already heard how, on May 14, 2014, Chief Superintendent James (Jim) Sheridan, now retired, forwarded the incorrect Tusla referral, with the false rape allegation against Sgt McCabe – which originated out of an error made by RIAN counsellor Laura Brophy in a referral to Tusla in August 2013 – to the then Assistant Commissioner Kieran Kenny.

This was on the very same day that Ms D contacted Ms Brophy  to say she had never accused Sgt McCabe of rape.

Mr Sheridan, who had previously read the file pertaining to Sgt McCabe and Ms D’s 2006 allegation before sending it to Sean Guerin SC for his scoping exercise into allegation of Garda misconduct in Cavan/Monaghan, forwarded the referral in the full knowledge that it was incorrect and without making it known to Mr Kenny that it was incorrect.

Sgt McCabe’s file contained documentation from Supt Noel Cunningham, who carried out the original investigation and documents pertaining to Supt Cunningham’s contact with the HSE about the matter.

By way of explaining his action, Mr Sheridan told the tribunal that he was seeking to understand how the mistake happened.

In addition, Chief Supt Sheridan told the tribunal that Supt Leo McGinn had told him that Mr D said the rape allegation was incorrect before he wrote his letter on May 14, 2014. Supt McGinn told the tribunal he couldn’t recall this conversation.

The tribunal has heard how Mr Kenny forwarded the incorrect referral to the office of the Garda Commissioner.

At that time, Noirin O’Sullivan would have been the Acting Garda Commissioner as the previous Commissioner Martin Callinan had resigned on March 25, 2014.

Patrick Marrinan, SC, for the tribunal, put it to Mr Kenny that he knew the referral had an error.

Mr Marrinan asked Mr Kenny why the rape allegation in the wrong referral didn’t leap off the page at him and he didn’t think ‘no, McCabe wasn’t accused of rape’?

Mr Kenny said it appeared to be a new allegation, emanating from a counselling session, and he had to consider it in terms of the “criminal aspects” of it.

“I took it as written,” Mr Kenny said.

The tribunal heard on May 16, 2014, Mr Kenny sent a letter to the Commissioner’s office [Noirin O’Sullivan], with the wrong referral attached.

But Mr Kenny never passed this on to the Garda Commissioner Noirin O’Sullivan.

Instead, after getting the amended referral from Mr Sheridan, Mr Kenny wrote back to Mr Sheridan and said he would hold a meeting in Mullingar Garda Station with Mr Sheridan and Mr McGinn in his office on Monday, June 16, at 10am. This meeting didn’t take place until July 16, 2014.

Mr Kenny was asked about what he believed needed to be investigated at this point.

He told the tribunal that, at this point, he wanted to sit down with the officers involved – Chief Supt Sheridan and Supt McGinn – to allow them to bring him up to date on all aspects of the matter and to tease them out.

The tribunal has heard that, at this time, Mr Kenny was of the understanding that no referral had been sent to the the HSE in regards to the 2006 allegation.

“I don’t believe I had knowledge that a referral had been sent to HSE at that time.”

Mr Kenny added that he was relying on information from Chief Supt Sheridan that no referral had been made.

Minutes of the meeting have already been discussed at the tribunal and it’s heard that it was decided that legal advice would be sought from the Head of Legal Affairs Ken Ruane and that contact would be made with the HSE to get a further explanation as to how the error had occurred.

But neither of these things happened.

“Assistant Commissioner Kenny outlined that he was of the view that the two issues arising are that the incident was not recorded on PULSE and there was no referral made to the HSE. What we, An Garda Síochána, now have is a referral from the HSE.

Breffni Gordon BL, for Sgt McCabe, asked Mr Kenny if this meeting was an opportunity to keep the file in existence.

The tribunal heard that, in the end, Mr Kenny never told the Commissioner that this referral contained an wholly unrelated rape allegation.

It also heard, the Commissioner’s office was never sent the corrected referral.

Mr Kenny told the tribunal that, right up until he made a statement to the tribunal in May of this year, he was always under the impression that an amended notification had been sent to the Commissioner.

Readers will note that this was despite further communication between Mr Kenny and the Commissioner’s private secretary Frank Walsh about the matter.

The tribunal heard of a letter Mr Walsh sent to Mr Kenny on July 17 – a day after the meeting in Mullingar, in which Mr Walsh requested an update on his letter of May 16.

“I am directed by the Commissioner to refer to previous correspondence from your office on 16 May 2014, in the above and to enquire on the current status of the matter.”

Judge Peter Charleton asked what happened as a consequence of that letter.

The tribunal heard that, after the meeting in Mullingar Garda Station, Mr Kenny did write back to Supt Walsh on July 28, 2014 and outlined that there had been a meeting and, at that meeting, it was decided legal advice would be sought from the Head of Legal Affairs Ken Ruane and that contact would be made with the HSE.

The last line in the letter said: “Developments will be reported”.

However, the tribunal heard from Mr Walsh that no such developments were reported even though Mr Walsh had later written a letter to Mr Kenny stating:

Please report further following consultations with the Head of Legal Affairs and the HSE.

Mr Walsh also told the tribunal the incorrect Tusla referral was still in the Garda Commissioner’s office – uncorrected – when he finished his position 12 months ago.

Similar to Mr Sheridan, Mr Kenny said he viewed the error as an error by another agency and that the onus was on either Tusla, HSE or RIAN counselling to inform Sgt McCabe of the error.

He said he expected they would investigate the matter themselves and that, after that, they’d write to McCabe and tell him about it.

Previously: Who Knew What, When?

‘I Don’t Know If It Was Through Intention. I Can’t Explain It’