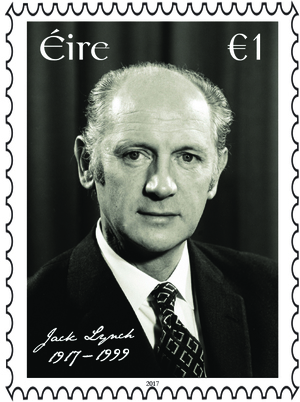 John “Jack” Lynch was born on 15 August, 1917. A Cork based barrister and politician, he served two terms as Taoiseach of Ireland, from 1966 to 1973 and from 1977 to 1979. Lynch first came to prominence locally as an exceptional sportsman, winning a very impressive 10 senior county championship hurling medals.

This commemorative stamp (€1) was designed by Vermillion Design and is available, with a very collectable First Day Cover, and both are available at main post offices, at the stamp counters at Dublin’s GPO or online at link below…

Get Your Eircode On

Sure Eir Would You Get It?