A few weeks back I offered you my suggested Summer political reading list, today I propose an accompanying political movie viewing list. The movies below all have the benefit of being available on the Irish Netflix service, but they can also be viewed elsewhere.

By the way, one of the authors featured in my political books list, Chris Patton, will be talking with John Bowman as part of Dublin City Council’s Dublin Festival of History on September 30th.

And now for the movies… Best of Enemies: Buckley Vs Vidal

This is an absorbing account of the rivalry, if not visceral hatred, between US writers and commentators Gore Vidal and William F Buckley. Their stores are told through their participation in a series of televised appearance during the 1968 Democrat and Republican conventions.

Rather than just show the conventions live, the US TV network CBS had elected, mainly due to costs, to invite both men, Vidal the darling of the liberal set and Buckley the arch conservative, on to debate each other and comment on that night’s convention proceedings.

We see the personal tension slowly mount between the two erudite, cultured and witty men. The movie features lots of archival material, along with selections of both men’s political prose read by Kelsey Grammer as Buckley and John Lithgow as Vidal. Even if you have no interest in politics, let alone US politics of the 60s and 70s, the story of the two men will enthral. 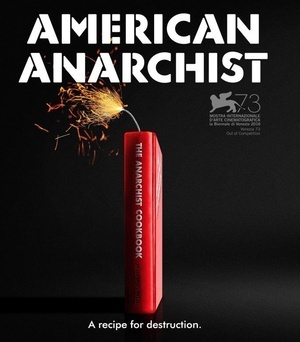 Sticking with the turmoil of 60s/70s America, if Saul Alinsky’s Rules for Radicals was the political handbook of the radical left in the 60s/70s then William Powell’s Anarchist’s Cookbook was the instruction manual for militant anarchists with its recipes and directions on how to make homemade munitions and ordinance.

The documentary interviews Powell today and explores his motivations in producing the book aged 19 and how he has spent most of life since regretting it. Powell reveals how he found the information in a series of US Department of Defence manuals openly available in the New York public library.

The documentary explores the febrile atmosphere in America in the 60s (timely given the events of the past few days in Virginia) and how the Vietnam war and political scandal alienated many in that generation. Get Me Roger Stone

From Powell on the left we now turn to another product of 60s American, but time from the right: Roger Stone. A bit like Rumsfeld’s Rules or the earlier Fog of War, the makers attempt to tell the story of Stone’s career via a series of cynical rules that Stone claims has guided his career as a political operator and lobbyist.

His “rules” are far from original, but it is a handy device to narrate his story and career trajectory from a minor walk-on role in Watergate, to a bi-sex scandal while advising Bob Dole’s presidential bid, to becoming a regular on the conspiracy lunacy that is Infowars.com, to serving as an adviser to Donald J Trump.

Stone comes across as a major league narcissist who was around when a lot of things happened, but was never really a mover and shaker in any of them. He is more than just a dirty tricks merchant, but not a lot more.

All that said, he does offer a worthwhile perspective on the American Alt-Right and the blurring of the lines between media and politics and the documentary is entertaining and colourful. My Way: The Rise and Fall of Berlusconi

From narcissists in America we now turn to one of Europe’s great political narcissists: Silvio Berlusconi.

In this movie, the Italian Tycoon and politician tells his own story in a series of interviews with his biographer, former FT correspondent Alan Friedman. This is very much the film of the book, but offers an interesting insight into the man. Emmanuel Macron – Behind the Rise.

From an Italian looking backwards we move to a French man looking forwards. Behind the Rise is, as it claims, an objective look at the 200 days leading up to the final round of voting in this year’s French presidential election.

The French film makers had virtually open access to the candidate and his campaign team, offering some fascinating insider footage of the campaign. The more fascinating thing is that the makers started making this movie before Macron emerged as a front runner.

The pace throughout is brisk. The production values are high. Macron emerges as a decent and driven guy who knows his own mind. We see him when he is relaxed and when he is stressed, even angry, but at all times he seems about eerily in control of himself. With the recent Nazi protest in Charlottesville in mind, ever wonder how an anti-Semite would feel if they discovered that they are in fact, Jewish? Wonder no more. This absorbing and intriguing movie tells the story of a young ultra-far-right Hungarian politician, Csanad Szeged, who discovers via an even more anti-Semitic rival that he is, in fact, Jewish.

At first his Jobbik colleagues advise him to keep quiet, but that proves impossible. The movie chronicles his journey from that point onwards and invites you to wonder if he is sincere or just an ambitious man looking for a cause, any cause.

Finally, moving away from US and European politics, this remarkable film about Zimbabwean politics tells the stories of the two lead negotiators from Mugabe’s ruling Zanu-PF and the opposition MDC-T as they struggle to work together to write a new constitution for the divided country.

While it focusses on these co-chairs of the constitutional committee CoPac, the real main character is President Mugabe, who has only agreed to a new constitution under duress and now fights to cling to office threatening and intimidating opposition leaders. Watch Mugabe’s practised disdain as he launches the consultative process for a new constitution.

As an antidote to the politics overload suggested above I suggest the following series on Netflix for some binge viewing: First is the hilarious Its Always Sunny in Philadelphia. It follows the increasingly manic adventures of the “gang” who own and ostensibly run a dive bar in South Philly, which never seems to have any customers.

The other is Rake, the story of a self-destructive Aussie barrister with w criminal practice – he likes cocaine – and the price of his habit is outstripping his earnings. There is an American remake, which is a bit sanitised, but enjoyable nonetheless.

18 thoughts on “Your Political Netflix Fix”