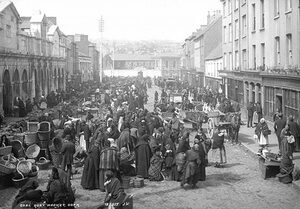 Lil Underhill was an atypical supporter of mine. She lived in Corporation Buildings, near Cornmarket Street – Cork’s Coal Quay market.

These three storey red bricked buildings were an early, and successful, attempt at providing social housing in Cork. In this 50sq metre patch Lil lived most of her life.

Near adjoining doors led on one side to a ground floor apartment, with the other door leading, up a near perpendicular stairway, to a duplex overhead apartment.

Lil’s mother had been a shawlie, one of the women who were the heart and soul of Cork’s Coal Quay, and for many the city itself. As a young woman Lil worked on the stalls with her mother, making her a last link with a now vanished part of Cork life.

Lil would have been in her eighties when she first cast a vote in my favour. My office had responded when Corporation Buildings had been badly flooded. Lil, and other residents, appreciated the effort.

In fact, Lil was the most effective community worker at the time, making sure those less capacitated (although frequently younger than her!) were looked after.

This also involved many visits to Lil’s home. There were found few concessions to modernity. Most of her photographs were black and white, including a gorgeous picture of her in her twenties as a flapper.

Her concerns were centred around her local community. She never asked about the banking crisis, never expressed an opinion on any social issue. Her only expectation was that effort was put into meeting what was needed in her community.

She expressed support in the most affectionate way. Standing at less than than five foot tall, she would reach to pinch my cheek, saying ‘Danny Boy’ as a friendly greeting. Then I would know I had done something good for someone who was good.

She died, aged ninety one, a few weeks after I had taken her to vote for 2011 general election. While I valued the vote as I had always valued the support, I would have been aware that the vote would make little difference to my electoral fate. Nevertheless she exhibited on that day, the same effervescence and joie de vivre, she always had done.

Having had one Lil Underhill in my political/public service life, was worth far more to me than the thoughts of any number of anonymous critics, with their unrealistic expectations, who only ever sought to diminish.

It’s easy to categorise all politics as being about self aggrandisement, doing over political opponents, or seeking vanity projects on which to hang a legacy. But that isn’t all politics.

To have known someone like Lil Underhill made life in politics worthwhile for me.

28 thoughts on “Lily Of The Valley”