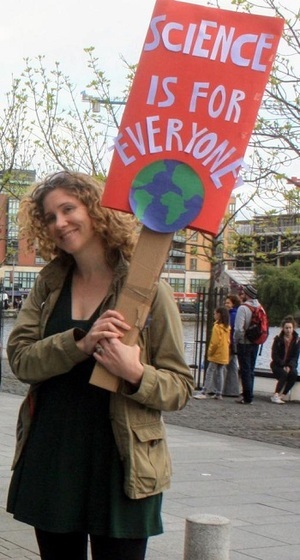 Dr Jessamyn Fairfield is a lecturer in the School of Physics in NUI Galway director and compere of Bright Club in Ireland, the co-organiser of Soapbox Science Galway, and an established improviser and comedian.

I’m a physicist and a science communicator, and I’ve had a lot of unique experiences in my life as a result of those passions.

But I never expected to be detained at UK border control for three hours, and eventually denied entry and sent back to Ireland, just for doing science communication.

You see, although I have lived and worked in Ireland for the past six years, I have an American passport and no special privileges in any other part of Europe.

And I have been all over Europe as part of my job in Ireland: to attend research conferences, be hosted as a visiting researcher in another lab, speak on panels, and give public lectures and science comedy performances as to engage the public with science.

I came to Europe as a postdoctoral researcher and am now a lecturer at NUI Galway, running my own research lab and a plethora of public engagement events.

Mobility is a critical issue for physicists. We may need to travel for a conference, to visit collaborators, or even to move abroad to start a new career stage

But when I showed up in Cardiff to do a science comedy show as part of a festival, I was stopped at the border. I was not going to be paid for my performance, and had paid for my own travel out of pocket.

However the border agents considered the festival ticket and parking pass that I had received (for an event I was to speak at) as a form of payment in kind.

This is equivalent to saying that invited speakers at a conference are paid if their conference registration is covered, and nothing I (or the festival organisers who were phoned) could say convinced them otherwise.

Throughout this process I was left alone for long stretches, told not to use my phone, and all my travel documents (from both the US and Ireland) were taken off me. It’s a process that is designed to make you feel powerless, and it works.  Finally I was fingerprinted and photographed, served with refusal paperwork, and sent back to Ireland.

There is now a black mark in my passport indicating I was refused entry to the UK.

This is especially ironic given my next planned trip to the UK will be to collect the IOP’s Mary Somerville Prize – a significant public engagement award that I am honoured to receive for my efforts to communicate science to the public.

And yet apparently I am not allowed to do public engagement activities, not just for free but at my own expense, in the UK.

Mobility is a critical issue for physicists. We may need to travel for a conference, to visit collaborators, or even to move abroad to start a new career stage.

Recent political developments such as Brexit and the travel ban in the US have been rightly criticised by researchers around the world for failing to account for how necessary the free movement of people is to science today.

Early-career researchers who can’t obtain travel visas easily are at a heavy career disadvantage. This is why mobility was a core issue of the recent March for Science.

To me, this is also indicative of how toxic our conversations about immigration in general have become. The border patrol officers I dealt with were as kind as they could be to me, but they were tasked with enforcing a system where all immigration is considered negative. Never mind that immigrants are often young, hard-working, and full of ambition.

Never mind that immigrants drive social change, spark innovation, bring new perspectives, and in fact draw less on social safety nets than citizens do (both because of their demographics and often because they aren’t allowed to).

Never mind that in science, many researchers move internationally, often multiple times, and in fact a huge number of Nobel Laureates are immigrants themselves.

The narrative we hear about immigration often seems to have a Schrödinger’s Cat quality to it: immigrants as lazy welfare cheats, who are also stealing our jobs.

We should respect just how much immigrants contribute, scientifically and otherwise, to the countries they have chosen to call home.

I hate that this disrespect starts at a very early stage: the recent story of the Afghan girls’ robotics team who were initially denied entry to the US for a robotics competition is heartbreaking. I was glad to see the decision reversed, as setbacks to girls in science and engineering are plentiful enough already.

I’m an immigrant, a physicist, and a science communicator, and I’m working hard to make the world a better place. Ireland has been welcoming, for me at least, so I’m doing a lot of that work here.

But if other countries want talented young people to come enrich their societies, they should actually make that possible. Otherwise we’ll go somewhere else.

Say, Why Don’t We Give The Silk Ties A Miss This Year?

The Queue Of Shame

Ode On A Grecian U-Turn

21 thoughts on “Science With Borders”