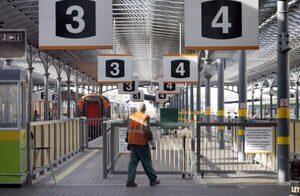 The rail network inherited by the Irish Free State in 1922 was the most densely networked system that then existed in the World.

Partition brought an end to railways in Donegal. It’s West/East emphasis was part of its divorce from its obvious economic hinterland.

The Civil War brought about further destruction. Anti Treaty forces concentrating their efforts on blowing up lines, to undermine their logistical uses.

The Second World War, or its more serious counterpart in Ireland, The Emergency, meant a restriction on services through an incapacity to import coal.

The founding of a State Transport company, CIE, (a Labour Party success of the first inter party government) gave brief hope that the potential of public transport in Ireland might be realised.

It would be a short lived show of independence. Almost fifty years into the life of the new State, the yoke of British oppression continued to linger. Irish administrators opted to slavishly ape policy changes on John Bull’s island.

The Beeching Report, which brought about the closure of many British rail lines, was mirrored and furthered in Ireland.

A story is told of Todd Andrews, then chair of CIE, meeting with a delegation seeking the protection of the West Cork railway. He asked how they had travelled. Invariably, they had come by car.

In Irish politics this has been taken as the classic way in which to deal with ‘whingers’. The truth was that the service had been progressively, and deliberately, run down.

Political antipathy towards railways continued into the 1980s. Then Fine Gael’s Jim Mitchell brought a proposal to Cabinet to close most rail lines not connecting to Dublin. It didn’t fly.

After that there was something of a renaissance on investment towards rail, even if much of this was centred around the Greater Dublin area – DART, Luas, re-opened lines and new stations; the penny seemed to be dropping.

Until now. It is hard to know who the Irish rail management is trying to blackmail most with its current proposals – its workers or the government?

Whichever, the management of Irish Rail should be faced down.

I would go further.

Two new companies should be established – one for commuter services; the other for rail infrastructure. If the commuter company abandons a service, the infrastructure company could make such lines available for other companies.

For joined up thinking on Irish railways, this disconnect needs to be made.

23 thoughts on “Railing Against Progress”