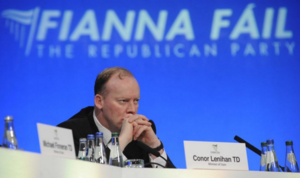 It follows a report in yesterday’s Irish Times in which it was reported Mr Lenihan is interested in running in the next European elections in 2019.

During the interview, Mr O’Rourke asked Mr Lenihan about an opinion piece written by Fintan O’Toole in today’s Irish Times in which Mr O’Toole focused on an interview in last weekend’s Sunday Business Post in which Fianna Fáil’s Barry Cowen told the newspaper the party wanted to see the Vat rate for builders and developers cut from 13% to 9%.

“We’re looking at a Vat holiday for a sunset period for the construction sector. We are calling for a reduction in development charges and planning levies. The pussy footing is over. There has to be radical measures for a period to allow the sector get back on its feet. To allow the sector to create affordable homes, to allow local authorities to be given the space to build houses.”

The party [Fianna Fáil] has a bad case of builder’s bum: when it bends over to help out its friends it reveals the hideous gap between its recent left-wing rhetoric and its true loyalties.

If tax breaks for developers created a stable housing market and good urban planning we’d be living on Paradise Island.

Developer-led get-rich-quick schemes, fuelled by tax incentives, have led only to disaster.

Further to this, Mr Lenihan and Mr O’Rourke had the following exchange.

Conor Lenihan: “I think there’s a very serious crisis here and the current government and the previous government have done very little in this area. We do need emergency measures, we need something that actually gets builders and the constructions sector building houses.

“This is not rocket science. We do need to provide incentives to people who are building houses to go out and build them. And if you talk to builders and plenty of us do, it’s very clear that the mixture of taxation on a house, to build a house, makes it very disadvantageous for people to get into building houses.

“So this is a very serious thing that has to be addressed. Now it’s nothing to do with anybody’s relationship with the building industry but I would point out that, notwithstanding the brickbat thrown by the likes of Fintan O’Toole against Fianna Fail in relation to our relationship or whatever, with the building industry that it’s very clear from the data, from 1922 on, from the period after independence, that the amount of social houses built by Fianna Fáil governments, is very consistent. We’ve always built more social housing than any other party in this State. So the record…”

Lenihan: “…is good in terms of one level if you look at the actual data…”

O’Rourke: “Well, I think you’d probably have to go back to the 1950s to find your real achievements…”

Lenihan: “No, the social housing schemes were started in the 1930s by the De Valera government and a time when the previous government had no interest….”

O’Rourke: “In the Ahern era, and thereafter, it became a question of just leave it to the markets.”

Lenihan: “Yeah, and I think that was a mistake by all parties in Leinster House. We need to have social housing…”

O’Rourke: “Ok, just to come back to where we started…and your potential return to the political fray here, your name being on the ballot paper. Have you spoken to Micheal Martin about this idea?”

Lenihan: “Of course I have, I’ve spoken to him and I made it clear that I was open and available.”

Lenihan: “Well he was very encouraging, of course. As party leader, he does not and cannot express a preference for one candidate over another. He has to be respectful to the membership but I was glad to be able to meet him and share my ambition in that regard.” 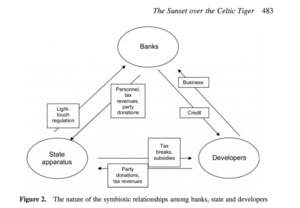 From an academic paper, published in the Irish Political Studies journal in 2011, about the Irish financial crash.

The paper was called Financial and Economic Crisis: Explaining the Sunset over the Celtic Tiger, and was written by Raj Chari, of Trinity College Dublin and Patrick Bernhagen, of the University of Aberdeen in Scotland.

Spotting The Woods For The Trees