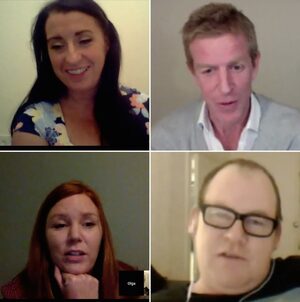 A warm thank you to, clockwise from top left, Anne Marie McNally, ‘Preposterous‘, Johnny Keenan and Olga Cronin, our panel on last night’s Broadsheet on the Telly.

You can watch the show in its entirety (above).

Anne Marie, political director of the Social Democrats, fresh from her party’s think-in, gave an insight into the Soc Dems’ strategy for the housing crisis, their hopes for the ‘Locked Out’ generation and preparations for a General Election.

Johnny spoke about the postponement of this weekend’s One Love Concert for Direct Provision and why, despite some hurtful trolling, he remains bloody but unbowed.

Broadsheet on the Telly Tonight

I Don’t Think You’re Ready For This Telly

21 thoughts on “Giving It Socs”