Taoiseach Leo Varadkar and Minister for Housing Eoghan Murphy at the Housing Summit in the Custom House, Dublin last week

It’s one thing for Government to a miss a second important housing target, it’s another for entire nation not to realise it’s being missed.

Last week, the Government said that its current plans for building social housing in the 12 months of 2017 was Y.

What is X and what is Y?

Confused? You really should be.

Neither X nor Y has been clearly communicated by either the Government or old media.

This piece will clarify both and lambast the old media for its failing in this regard.

The story of X

In July 2016, the Government published its Rebuilding Ireland report. The 117-page report was largely devoid of meaningful targets.

For example, it committed to “47,000 social housing units delivered by 2021, supported by investment of €5.35 billion”. This is typical of this government’s announcements which take the format – “we’ll spend x squintillions to build y bazillions of homes by the time hell freezes over”.

Short-term targets, by which the Government could be held to account, were nowhere to be found.

You remember the brouhaha during this summer when the Government missed its target of getting the homeless out of emergency accommodation by July 1? That wasn’t a target in Rebuilding Ireland.

When the report was being launched, the then Minister for Housing Simon Coveney said the use of hotels would be “practically eliminated by the middle of next year”. That was the only short-term target and it wasn’t even in the report!

And for the few people who paid attention, they interpreted that commitment as rehousing the homeless, but as the homeless numbers continued to increase month-by-month, a new term entered our lexicon “family hub”, which is the euphemism this government is applying to the already well-established term “poorhouse” (singletons will be accommodated in these new poorhouses, and whilst a singleton might be a one-person “household”, they can hardly be described as a “family”, and what sort of media would embrace and repeat the term, the progressive-sounding “hub”?).

Regardless, we all now know the Government has failed to meet the target of rehousing the homeless.

And some, perhaps most, think the target has been perverted anyway and poorhouses were never originally anticipated as solutions to homelessness.

So, what was the target for building social housing in 2017? The Rebuilding Ireland report didn’t actually provide a number. It did however provide a graph! 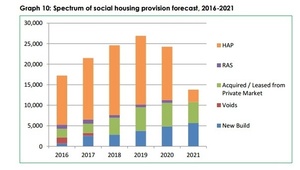 The blue represents actual new construction. So, what do you think the target was for 2017?

Seriously, in Ireland, this is how we divine Government targets for the provision of critical public services.

In fairness to the housing minister, last week, he predicted they would build 3,800 units in 2018 compared to the original target of 3,000 (no diff with clearly articulating that, eh?!) but given Paddy Power is offering odds of 1/3 for an election next year, the present housing minister is unlikely to be around to be held accountable for anything that happens next year.

The story of Y

On Friday last, the current housing minister (having been in the job for three months and a day, he should be up to speed by now) said this government will this year build four times the amount of social housing built in 2015.

Why didn’t he provide a clear figure though? Why didn’t he refer to social housing built in 2016, rather than 2015? I don’t know, but let’s look at the actual figures and an explanation might suggest itself.

The Department of Housing says a total of 465 social housing units were built in 2015, comprising 64 units built by local authorities and 401 by private sector housing associations (the likes of Cluid and Tuath).

In 2016 (not the reference year used by housing minister last week), 652 units were built by local authorities and housing associations. If the housing minister used the same format for a statement referencing 2016, it would read, “this year we will be building between 2-3 times what we built in 2016”.

Precisely, it’s 185% more than 2016 but that’s not as impressive as saying “four times” what we built previously.

Did the housing minister deliberately refer to the worst year on record as a base for comparison with current year plans? Who knows?

Did the housing minister avoid reference to a specific number in case anyone was keeping track of what the original plan was? Who knows?

What does this all tell us about Government and old media?

With a target of 3,000 units and a current plan of 1,860 units, representing a fairly pathetic 38% failing, you might have thought the housing minister would be battening down the hatches with all the criticism he’d be receiving? Not at all.

Between July – December 2016, old media appeared ignorant of the target of “practically eliminating” homeless in emergency accommodation by mid-2017.

Governments feel safe in announcing long-term targets, but will resist being nailed down on short-term targets. Governments will spin the bejaysus out of actual performance.

Old media allows Governments to announce meaningless plans. Where were the demands last July 2016 when Rebuilding Ireland was published for short-term targets by which performance and progress could be measured?

Is old media incapable of asking questions of “how much”, “when” and demanding meaningful responses.

And, in the middle of a housing supply crisis, old media fails to harry the housing minister and his department for, er, monthly housing supply statistics.