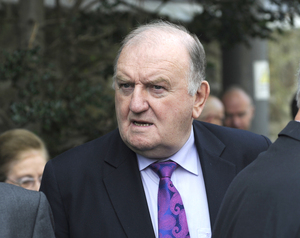 In the Times of Ireland.

The controversy over comments about rape made on Friday by the Newstalk presenter George Hook took an unexpected turn yesterday when the station began a fightback against its critics.

The radio station has decided not to use any contributors from The Irish Times in response to an article by the newspaper’s columnist Fintan O’Toole. On Tuesday O’Toole wrote that he would not appear on Newstalk again, describing it as “flagrantly sexist”.

Although there was no official statement to The Irish Times from the Communicorp-owned station, the ban was acknowledged by a source at the paper and Newstalk producers have been informed. A spokeswoman for the station could not be reached for comment.

Views, behaviours and individuals that contravened the moral hegemony of 1930s, 1940s and 1950s Catholic Ireland were publicly shamed, silenced and cast out by the thought police of the time. Abhorrent views were censured, stymieing intellectual and social development for decades.

Ireland is, thankfully, a different place now. Some would say our treatment of women has changed radically, but have our underlying social and political attitudes changed so much?

Today’s thought police see themselves as very different to those of 70 years ago. Their agenda is freedom and safety for women and girls.

However, the abhorrent and deeply damaging views of women and girls, articulated by Hook, teenage boys, and our Constitution alike, must be heard. They must be challenged. They must be changed. Simply silencing them will not achieve the safe, free world we want for our daughters.

George Hook should be challenged, not silenced (Kitty Holland, The Irish Times)