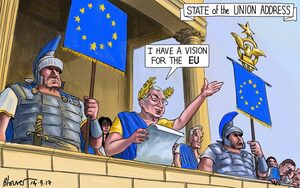 From top: Jean Claude Juncker as seen by the Daily Telegraph‘s Patrick Blower and Mr Juncker’s state of the union speech delivered yesterday

Readers should note that, on RTÉ’s Six One last night, Tony Connolly reported:

“I think people will be going through his speech quite carefully. I mean, look, he says he’s not an integration fanatic and his underlying theme today was he wants a Europe of freedom, of equality, of opportunity and the rule of law.

“And you could see where he was trying to balance, perhaps more ambitious roles for Europe with things that would really chime with public opinion – creating jobs, developing the digital agenda, protecting people against terrorism, having greater intelligence sharing among member states.

“Issues like migration, he said, obviously Europe had a responsibility to show solidarity with the downtrodden from other parts of the world. But, balancing that, by saying if you were an illegal migrant and you had lost your right to stay, then you should be sent home.

“I think the Irish Government will be looking very carefully at this idea of dropping the veto on any corporate tax legislation, a very sensitive issue for Ireland. It was in the written speech and it was dropped from the delivery.

“Now I’m led to believe that the delivery is what counts but the fact that he was kind of putting it out there, in the written speech, will raise some questions.

An Act Of Dog