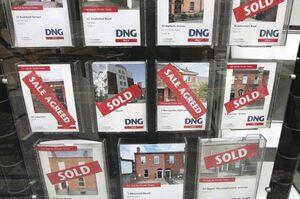 We woke up to the news today that Dublin property prices are predicted to return to pre-crisis prices by February 2020 – a mere 2½ years away.

The caveat of course is that this prediction has been made by “experts” Savills, who its fair to say have a bit of a vested interest in the property game.

Nevertheless you have to ask yourself, how did a country with the worst housing-market crash in the world return to such a place.

Fine Gael wisely advised us ‘to make sure that we don’t repeat the mistakes of the past’ and promised to “prevent that boom and bust cycle that bedevilled us for so many years”.

They told us they were different from Fianna Fail and that “there will be no return to the past where tax incentives for developers drove supply.”

The problem though is that rather than give tax breaks to developers to BUILD, they gave tax breaks to investors to BUY; 7 Year capital gains tax exemptions, introducing tax-free REITs, encouraging the use of tax free SPVs, QIAIFS and ICAVs.

OK but all that was done to ‘kick start’ the property market and the government have learned their lesson, right?

Successful lobbying by interest groups such as the Residential Landlords’ Association created the myth that landlords were leaving the market due to the the ‘stringent costs’ of running a rental property. Landlords it seems, are also allergic to paying taxes.

The government, believing the hype, immediately increased tax relief on mortgage interest meaning landlords could now deduct 80 per cent of the interest paid on borrowings on a rental property up from 75 per cent previously, with “full interest deductibility” to be restored for landlords by 2021.

The Department of Finance recently held a consultation on the “tax and fiscal treatment of landlords” and our new Minister for Housing, Planning and Local Government, Eoghan Murphy has publicly stated that he thinks we need to “look at new measures to support and/or encourage landlords”.

Lessons learned? I don’t think so.

Is He Selling Us Short Or Buying Us Long?

67 thoughts on “Back Where We Started”