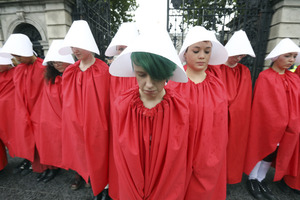 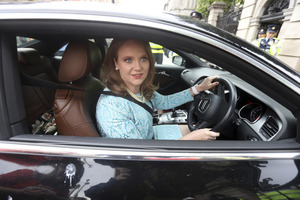 From top: Members from ROSA (Reproductive rights, against Oppression, Sexism & Austerity) activists ahead of a ‘Handmaids’ lobby at the Dail today to mark the first public meeting of the Oireachtas committee on the recommendations of the Citizen’s Assembly;’ Fine Gael Senator Catherine Noone, chairwoman of the committee arriving at Leinster House this afternoon

A meeting of the Dáil Committee on the 8th Amendment to consider the recommendations of the Citizen’s Assembly is taking place.

Liggy, who once ‘took the boat’ writes:

The Oireachtas Committee on the 8th amendment is in session today. 21 men and women meeting in private to debate the findings of the Citizens’ Assembly on abortion rights.

The results of that paper is summerised here:

The conclusion of the assembly’s findings was:

“….there is a strong desire for change and … a belief that all people in pregnancy should be given choice and full rights over what happens to their bodies.”

There is a concern among pro-choice groups that the committee will focus on the most narrow circumstances of the findings of the assembly and try to dilute the clear directive the assembly’s findings have given them.

Hence the protest of the Handmaidens outside Dáil Éireann today:

A choice. That is all that is being asked for. Men can elect to have any cells they want removed from their body. Women should have that same right too. It’s actually not that much to ask for and really belittling to have to ask for it.

The people who do not want to give women that choice are weirdly and ghoulishly obsessed with the contents of the deepest, darkest part of a woman’s body.

As if it is something we cannot be trusted to have autonomy over ourselves. They don’s seem to be as concerned with the cells once they have grown to the point of being born.

There seems to be something about all the crying, puking, shitting, snotting and expense that puts them off.

Amazingly, anti-choice organisations like Iona seem loathe to give any time or trouble themselves about Irish children in poverty, in danger, in need of physical or mental help or the parents who try their best to support them.

Imagine not having to tie down people who have been raped and forcing them to give birth.

Imagine bring able to quickly prioratise the life of a living person in a medically perilous position over a foetus.

Imagine being able to abide by a family’s wishes to turn off a life-support machine rather than using a person’s cadaver as some sort of morbid incubator for a dying foetus.

Imagine 100 people not having to travel to the UK for abortions every week.

Imagine our newspapers and media screens not being filled with the debate about whether to give women a simple choice or not.

What WOULD we do with all that free time?

Previously: ‘I Took The Boat’

93 thoughts on “Handmaid In Ireland”