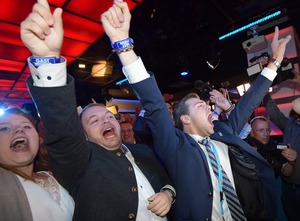 Projected results put the AfD on 13%, behind Angela Merkel’s Christian Democrat-led alliance on 32.9% and the Social Democratic party on 20.8%. The rightwing populist party’s delegates are expected to take more than 80 out of 631 seats in the next parliament.

While the result may not be on the scale of 52% of Britons voting to leave the European Union or 46% of US voters casting their ballot for Donald Trump, it nonetheless represents a landmark in postwar German history.

Germany’s rightwing populists will arrive in the Bundestag with the best result for any new party since 1949, a higher share of the vote than either the Greens or the leftwing Die Linke have achieved in several decades.

In the states that used to form East Germany, AfD looks likely to become the second-largest party.

AfD may not be the first far-right party to enter the Bundestag since the second world war: until 1960 a number of small nationalist groups took part in the coalition government under West Germany’s first post-war chancellor, Konrad Adenauer.

But it will be the first party with an overtly nationalist rhetoric and agenda to claim seats in Berlin’s Reichstag, a building that still echoes with the horrors of the Nazi era.

Here is the problem: A far-right party has achieved substantial support even in Germany, a country with a history that serves as a warning of what the far right can do in power, and a political establishment that has long paid attention to confronting the right.

Germany furthermore lacks many of the characteristics commonly associated with far-right populism — the economy is in good shape, the unemployment rate is low, and Germany’s power and prestige are at a historic high. All this says that citizens are more disaffected and populism has greater appeal than many analysts have recognized.