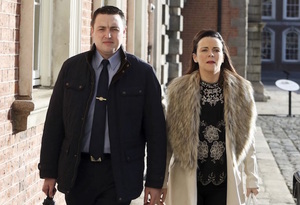 Garda Harrison is involved in the tribunal as he claims he has been targeted by senior officers and that Tusla social workers were “brought into the equation due to the manipulation of his situation and the extraction of an unfair and untrue series of allegations of serious domestic misconduct by his domestic partner“.

Supreme Court judge Peter Charleton, who is overseeing the proceedings, is specifically looking at the tribunal’s term of reference ‘n’ – which is “to investigate contacts between members of An Garda Siochana and TUSLA in relation to Garda Keith Harrison”.

It follows a visit made by social worker Donna McTeague in February 2014 to the home of Ms Simms and Garda Harrison in Donegal in which Ms McTeague spoke with the children in the home – a visit which the couple claims has had a profound effect on them.

Both Ms Simms and Garda Harrison have told the tribunal that they have no issue with Ms McTeague.

Garda Keith Harrison and Marissa Simms received a letter from Tulsa on February 2, 2014, in which Tusla requested a meeting with Ms Simms and Garda Harrison.

The events with Tusla came several weeks after Ms Simms withdrew her 38-page statement on January 11, 2014 – made to gardai during an 8.5-hour interview, on October 6, 2013 – in which it’s recorded that she said Garda Harrison threatened to burn her.

Ms Simms has since told the tribunal: “He never threatened to burn me. Ever.”

Ms Simms also told the tribunal that, when she was withdrawing her statement, Inspector Goretti Sheridan, who took Ms Simms’ statement along with Sgt Brigid McGowan, told her a story about another unnamed couple.

Ms Simms alleged: “She said, they had a row in front of their children and now social services are involved in these children’s lives and I can’t guarantee you that won’t happen to you.”

When Inspector Sheridan gave evidence in relation to this allegation, she said: “No, I did not, no way did I say that to Marissa.”

In a statement to the tribunal, about the February 2 letter, Marissa Simms said she “had no idea what this was for and assumed it was the doing of the gardaí in Letterkenny, because I took back the statement, and as suggested what would happen by Goretti Sheridan, social services were getting involved”.

When giving evidence, Ms Simms repeated that she assumed the arrival of the letter from Tusla was because she retracted her statement. So, it was suggested to her that maybe it was the case that she did know what the letter was about.

In relation to the initial meeting on February 7, Ms Simms said in her statement to the tribunal: “Ms McTeague explained that she dealt with families where children were at immediate risk but was confused as to her role in this instance as the incident occurred over four months previously.”

The tribunal has heard Ms McTeague has said she was never confused and never said this.

In her statement, Ms Simms said: “Before we [Keith and Marissa] left McTeague told us she didn’t think we would hear from her again, that she would be reporting to her team leader. No further action was necessary.”

“We left with mixed emotions, relieved that because that was the end of the matter, angry we had to go through that.”

In relation to the follow-up call made by Ms McTeague to arrange a home visit, Ms Simms, in her statement, said: “I was astounded and upset when I received a call from Donna McTeague. She apologised and stated that her team leader had been contacted by the guards and, as a result, she now had to do a house visit.”

While giving evidence, Judge Charleton specifically asked Ms Simms about her claim that Ms McTeague told her on the phone that she had to do a house visit because Tusla had been contacted by the guards.

Ms Simms said: “She didn’t say directly we have been contacted by the guards, no.”

She later said: “I’m just saying that she rang and said that she would have to do a house visit because of a direction she had been given by her superior.”

Judge Charleton asked: “Nothing to do with the Gardaí?”

She later said it was her “assumption” that the gardai had been in contact with TUSLA after she withdrew her statement.

The tribunal heard that in a statement to the tribunal, Ms McTeague wrote:

“I did not say my team leader had been contacted by the guards and, as a result, I had to do a home visit. The decision to undertake a home visit in any case for the purposes of completing an initial assessment is based on the need to ensure children’s voices and views are sought, observed and recorded in our assessments.

“In this case, it was my view, based on the information I had at the time of meeting with Ms. Simms and Garda Harrison, that there were likely no ongoing child welfare/child protection concerns. However, I added that I may need to visit the children. Both Ms. Simms and Garda Harrison agreed. Following discussion with my team leader, it was agreed I would, in fact, complete the home visit, meet the children, and if no new issues arising, the case would be closed.”

At the Disclosures Tribunal today.

Garda Keith Harrison is continuing to give evidence.

The claims made about what Ms McTeague did or did not say have been put to him.

Was he saying that, at the end of the meeting on February 7, that, as far as everyone was concerned, a home visit was unlikely.

Judge Charleton also asked was Garda Harrison saying that, somehow, gardai manipulated a situation that gave rise to a “change of plan” resulting in a home visit.

Judge Charleton also asked was Garda Harrison saying that the change in the mind of Tusla was affected by the gardai for malicious reasons against him.

Following on from this.

Patrick, Marrinan SC, for the tribunal, read out excerpts from an affidavit that Garda Harrison lodged in High Court on May 15, 2015, regarding claims made about Ms McTeague.

These include the claim that Ms McTeague was confused about why she was meeting with Ms Simms and Garda Harrison on February 7, 2014.

As mentioned above, the tribunal has heard Ms McTeague has said this is not true.

The affidavit also includes the claim that Ms McTeague said she might have to meet the children but that it’s unlikely – however this has also been refuted by Ms McTeague.

In relation to the claim that Ms McTeague told Ms Simms over the phone that she had to make a home visit because of contact with the gardai, Garda Harrison said he was standing by this claim.

Judge Charleton intervened to point out that, in his statement to the tribunal, Garda Harrison was ascribing words to Ms McTeague and inferring that he heard Ms McTeague say them.

He asked Garda Harrison if she said them and if she didn’t, why was he ascribing them to her.

Garda Harrison admitted that he did not speak to her directly and that this was information relayed to him by Ms Simms.

Mr Marrinan SC, for the tribunal, pointed out that, nowhere in either his statement to the tribunal or in his affidavit did he make it clear that this information came from Ms Simms and that he didn’t have direct knowledge.

Garda Harrison told the tribunal: “I am in no doubt that this was said to me.”

Garda Harrison responded: “No, I’m not tailoring anything.”

Garda Harrison has also claimed in his statement to the tribunal, and in his affidavit, that, during the home visit, Ms McTeague said her team leader Bridgeen Smyth was close to Sgt Brigid McGowan from Letterkenny Garda Station.

The tribunal has heard that Ms McTeague has said: “At no point in time did I ever make reference to any relationship or otherwise between Sgt McGowan and Bridgeen Smith in my discussions with Marissa Simms or Keith Harrison.”

She also said her belief is that their relationship is purely professional.

Garda Harrison told the tribunal that Ms Simms told him that Ms McTeague said that.

He told the tribunal: “There was certainly mention of that to Marissa. I’ve no doubt about that.”

However, he conceded he wasn’t in the presence of the two women when this allegedly discussed as they were in another room while he was with the children in the sitting room.

Asked how he could make this claim in his affidavit and statement, he said: “Because it was a result of a direct conversation I had with Marissa afterwards.”

Garda Harrison added: “I’m satisfied I was told the truth.”

Previously: Meanwhile, At The Disclosures Tribunal

9 thoughts on “Meanwhile, At The Disclosures Tribunal”