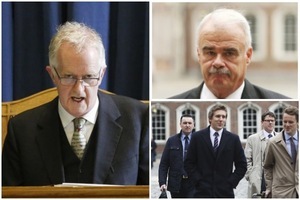 Proceedings have yet to begin and it’s just been announced that they now won’t start until 1.30pm.

Readers may recall how the tribunal heard new evidence late yesterday which appeared to link the Assistant Commissioner Kieran Kenny to a Garda strategy meeting where it was decided that matters pertaining to a domestic incident between Garda Keith Harrison and his partner Marissa Simms would be referred on to Tusla and GSOC.

The notes were written by Chief Supt Terry McGinn who was present at the meeting in Letterkenny Garda Station on October 8, 2013 – two days after Ms Simms gave a statement to gardai on October 6, 2013.

It’s understood Supt O’Loughlin is reference to Chief Supt Anthony McLoughlin, of the B Branch.

Earlier this week, Patrick Marrinan SC, for the tribunal, put it to Garda Harrison that there didn’t appear to be “a scintilla of evidence to suggest that either Assistant Commissioner Kenny or the Commissioner of An Garda Síochána or anybody in Garda Headquarters had any input in relation to the meeting that took place on the 8th October and the referral of the matter to Tusla”.

Yesterday, in light of the note, Judge Charleton called for statements to be made to the tribunal by both retired Assistant Commissioner Kieran Kenny and Chief Supt McLoughlin by this morning at 10am.

Judge Charleton also criticised the Garda Commissioner for not ensuring that Mr Kenny and Mr McLoughlin had made statements.

Readers should note that, subsequent to the meeting of October 8, 2013, a house visit was eventually made by social worker Donna McTeague to the home of Garda Harrison and his partner Marissa Simms on February 19, 2014 and, after concluding there were no issues of concern, Garda Harrison and Ms Simms received a letter from Tusla on February 27, 2014 to say the matter was closed.

In respect of the GSOC referral, it was sent to GSOC on October 9, 2013, as a Section 102 referral which concerns matters that indicate “the conduct of a member of the Garda Síochána may have resulted in the death of, or serious harm to, a person”.

The tribunal has already heard that the GSOC referral didn’t proceed.

George O’Doherty, Head of Corporate Services and Human Resources at GSOC, said there was nothing in Ms Simms’ statement to suggest such “serious harm” had been inflicted on her.

In addition, it heard that, on December 10, 2013, Dan Wright, of GSOC, wrote to the then Chief Superintendent in Internal Affairs, Chief Supt Anthony McLoughlin, to tell him that the Section 102 referral was “improperly referred in the view of the Commission” but added: “The Garda Ombudsman Commission accepts, however, that the decision to refer a matter to GSOC is entirely one for An Garda Síochána.”

Previously: ‘It Is A Case Of The Tribunal Bowing Figuratively A Bugle As Loud As It Possible Can’

2 thoughts on “Meanwhile, At The Disclosures Tribunal”