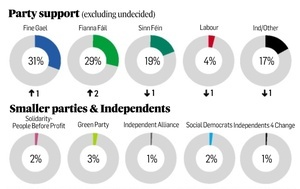 That time, in February 2016, the two old Civil War parties struggled to hit 50 per cent of the vote – a far cry from the days when they commanded 80 per cent between them. Their opponents hailed it as further evidence of their irreversible decline and the end of the old duopoly. And that’s how it looked.

But that decline has proved not so irreversible. Now their combined support is at 60 per cent. Throw in the Labour Party, the Greens and a lot of the Independents and you have well over two-thirds of voters aligned to broadly centrist politics.”

24 thoughts on “The Hard Centre”