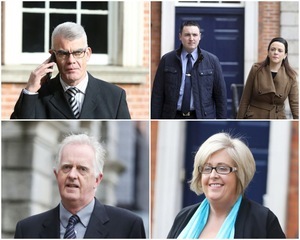 Garda Harrison claims his working life has been difficult since he raised concerns about a garda being involved in the distribution of drugs in Athlone in 2008, and subsequently arrested the same garda for drink-driving in 2009.

It is his contention that the gardai manipulated domestic incidents involving him and his partner Marissa Simms that resulted in a referral being made to Tusla in February 2014.

This has been rejected by both An Garda Siochana and Tusla.

The decision to make a referral in respect of Garda Harrison to Tusla was made during a meeting about a statement made by Ms Simms on October 6, 2013, following a row on September 28, 2013.

At this meeting, it was also decided that a Section 102 referral should be made to GSOC.

A Section 102 referral concerns matters that indicate “the conduct of a member of the Garda Síochána may have resulted in the death of, or serious harm to, a person”.

Serious harm, the tribunal heard, is defined as: “injury that creates a substantial risk of death, causes serious disfigurement or causes substantial loss or impairment of mobility of the body as a whole or of the function of any particular bodily member or organ”.

Today, Dan Wright, of GSOC, who told the tribunal he was involved in setting up GSOC and writing many of its policies, told the tribunal that, in all his time at GSOC, he can’t ever recall taking a referral such as the one that was sent in to GSOC in respect of Garda Harrison in October 2013.

Ms Simms had neither died nor was seriously injured in the row.

The two rationales communicated to Mr Wright for the Section 102 referral were from Supt McGovern, who said it was due to the “psychological harm” element of the incident and, from Chief Supt Terry McGinn, that it was their belief that Garda Harrison may cause either death or serious harm to Ms Simms in the future.

Mr Wright told the tribunal that GSOC is concerned about matters in the past not the future and that the protection of life and property is a matter for An Garda Siochana and not GSOC.

But first to recap.

Readers will recall the following sequence of events:

September 28 2013: Marissa Simms and Garda Harrison had a row.

October 6, 2013: Ms Simms made a statement to Inspector Goretti Sheridan and Sgt Brigid McGowan in Letterkenny Garda Station over 8.5 hours.

In that statement, it’s recorded that Ms Simms claimed Garda Harrison threatened to burn her during a row on September 28, 2013.

Also in her statement, Ms Simms is recorded as saying that, during texts and emails, during the week after their row and that he: “…didn’t mean that he was physically going to burn me but meant that he was going to destroy me.”

Ms Simms has since told the tribunal that Garda Harrison never threatened to burn her and that he told her she was going to ‘get burnt’ if she didn’t stop trying to please everyone.

Also on October 8, 2013, Ms Simms handed her phone into Letterkenny Garda Station. However the tribunal has heard it was not analysed until the start of the tribunal in March 2017.

As mentioned above, at this meeting of October 8, 2013, it was decided that the statements of Ms Simms and Ms McDermott would be forwarded to both the Garda Siochana Ombudsman Commission (GSOC) and a referral would be made Tusla and that an investigation would get under way.

The tribunal has heard evidence from Dan Wright of the Garda Siochana Ombudsman Commission, who was the senior investigating officer on call for Section 102 referrals on October 8, 2013.

This morning, he told the tribunal that he received a phonecall from Supt Eugene McGovern at around 12.35pm in which Supt McGovern informed him of a referral over threats by a garda to kill a female.

The tribunal has already heard that, on the same day, an email was sent from Chief Superintendent Anthony McLoughlin of the ‘B’ Branch , or Garda human resources, to Chief Supt Terry McGinn at 12.53pm.

RE: above and discussion on same. I know that the Supt will inform GSOC. But I am of the view that GSOC should be informed pursuant to S85 of the Act and at this time it is not a S102 referral.
Thanks
Tony

However, Chief Supt McGinn wrote back at 13.14pm:

Tony
The situation has been assessed and Supt McGovern has already made a referral pursuant to S102. We await a response from GSOC.
T

The tribunal has already heard that George O’Doherty, Head of Corporate Services and Human Resources at GSOC, rang Ms Simms about the statement GSOC received on October 9 – at which point she was in hospital with an infection – and that they shared another phone call on October 11, 2013, during which Ms Simms told Mr O’Doherty she did not want GSOC to deal with the matter.

Mr O’Doherty told the tribunal that Rita McDermott’s statement was hearsay as it was third party evidence.

Mr Wright told the tribunal that GSOC is compelled to receive every Section 102 referral and there is “clear blue water” between a decision by An Garda Siochana to send a referral and whatever decision GSOC makes in respect of that referral.

Mr Wright told the tribunal “neither group will trespass on the remit of the other”.

Mr Wright said he had heard evidence over the past few weeks that there was this “notion” that GSOC could reject or decline referrals. He said this isn’t true and that once a Section 102 referral is made, GSOC have to deal with it.

He also said there is no power within An Garda Siochana to revoke such a referral.

Mr Wright said that when he spoke to Supt McGovern on the phone he made it clear to him that the protection of life and property is a matter for An Garda Siochana and not for GSOC.

In terms of Mr Wright being aware of Chief Supt McGinn’s rationale for the Section 102 referral – any possible future chance of Garda Harrison harming Ms Simms – Mr Wright said he couldn’t recall where he got that information from.

In terms of Ms Simms telling Mr O’Doherty that she did not wish GSOC to deal with the matter, Mr Wright confirmed to the tribunal that GSOC is not precluded from looking into a matter that it feels would be in the public interest.

Similarly, under cross-examination from Mark Harty SC, for Garda Harrison, Mr Wright confirmed that there is no law in the Garda Act to preclude members of An Garda Siochana from carrying out its own investigation into claims referred to GSOC.

Mr Harty has already told the tribunal that 15 months passed – from the day Ms Simms made her statement – before any garda asked Garda Harrison about the claims.

Last week, while cross-examining Supt McGovern, Mr Harty accused the gardai of not treating the ‘burn’ threat seriously but Supt McGovern said this wasn’t true and that “All threats that come to our attention are assessed.”

The tribunal also heard that Mr Wright wrote to Kevin Clarke, principal officer of the Garda Division in the Department of Justice, on December 10, 2013, in respect of the Section 102 referral.

“I refer to incident referred to GSOC by Supt Eugene McGovern of Milford Garda Station, Co Donegal under Section 102 on Tuesday, October 8, 2013. An examination under Section 91 of the Garda Siochana Act 2005 has been conducted in relation to the above incident and following the examination, the matter has been discontinued.

“The examination of the circumstances clearly shows that at the time of this referral being made, there was no death or serious harm and the matter should have instead been notified to the Garda Ombudsman pursuant to Section 85 of the Act in the normal way. GSOC accepts, however, that the decision to make such a referral is a matter entirely for the Garda Síochána as per current protocol agreement.”

In February 2014, Superintendent Mary Murray was appointed to carry out an independent investigation into Garda Harrison.

On May 14, 2014, Garda Harrison made a protected disclosure.

Supt Murray has yet to give evidence.

Previously: ‘It Is A Case Of The Tribunal Blowing Figuratively A Bugle As Loud As It Possibly Can’