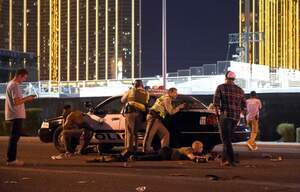 Outside the the Route 91 Harvest country music festival in Las Vegas, Nevada on October 1

Considering the extensive home coverage given to the Las Vegas shootings I am surprised that no Irish media outlet has raised concerns about the many anomalies in the official story. … Broadsheet with your conspiratorial bent should have gone to town on this….

….we heard from everyone when this happened, even Fintan O’Toole gave a sermon, but not a peep now that circumstances surrounding what happened are in some doubt…Why?

188 thoughts on “Ask A Broadsheet Reader”