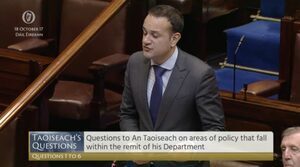 “I said the unit would be cost neutral, I never said it would cost nothing. Obviously any unit that has employees and is involved in information campaigns, of course will cost something. I said it would be cost neutral and if you look in the Budget book, at the Department of An Taoiseach’s vote you’ll see my overall vote, the overall budget for my department is down, it’s down about a billion and that’s detailed line by line as to where, as to where the savings are made in each section.

“In terms of what’s going to happen with the former GIS [Government Information Service], former Merrion Street GIS function will be integrated in the new structure while the Government press office will continue to operate as before dealing with day-to-day media queries, under the direction of the Government press secretary.”

Following this Labour leader Brendan Howlin again raised his concerns over the “move into political paid advertising” and the fact that political advertising that promotes interest of political parties in Government “cannot be paid for by the public purse”.

“Cost neutral is not the same as cost nothing. The money is being found from within my department and will in fact my department’s budget is being reduced.

“I actually think over time this will save money. It certainly did in other jurisdictions when you just look at the plethora across Government departments and Government agencies of different logos, different communication functions, different websites, different press functions, you name it.

“I think any rational person will see that if you co-ordinate all that, to put it together over a time, you’ll actually save a substantial amounts of money for the taxpayer.

Over The Rainbow, Way Up High

10 thoughts on “When Your Spin Is ‘Cost Neutral””